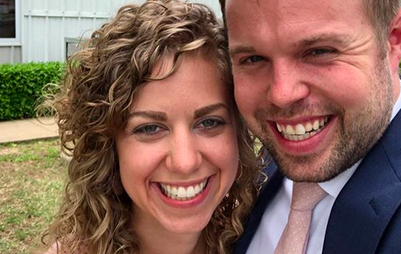 On Thursday, August 1st, John David and Abbie Duggar announced that they are expecting their first child together.

The couple spoke with PEOPLE about their exciting news. They said, “We are on Cloud 9 about welcoming our own little Duggar into the world. It really is amazing to think about being parents and having our own child to raise.”

For their announcement, they shared a picture of themselves in a plane. They are holding a baby onesie that reads, “Baby passenger on board.” If you’re a fan of this couple, you know that John is a pilot. His proposal to Abbie was in an airplane hangar. The announcement makes a lot of sense for John and Abbie, based on John’s interest in flying.

1 year ago today, we got engaged!!! Living in love together only gets sweeter with each passing day! 🥰❤️🥰

Shortly after John and Abbie got married, Duggar fans began speculating about when they would start a family. They got married on November 3, 2018.

After Grandma Duggar tragically passed away, Jessa Seewald, John’s sister, shared a post on Instagram hinting at another Duggar pregnancy. In her post, she said, “She was so excited about the many new great-grandbabies due this coming fall and winter, and it never got old for her. She welcomed each new baby with joy and would hold them with such tenderness and delight. We will keep her stories and memories alive for these little ones, but we’re sad that they will not have the blessing of knowing her in person as we have.”

Fans noticed that all of the women in the family who had announced their pregnancies were due in November, which is the fall. Fans thought that there must be another pregnant woman waiting to announce that she is expecting. Immediately, fans guessed that it would be Abbie.

In a recent post on John and Abbie’s Instagram page, John has his arms around Abbie and his hands are resting on her stomach. Fans thought that this might be a sign that she is pregnant as well.

Well, it looks like their fans were right! This fan-favorite couple is expecting their first child. They have yet to announce the due date and other details, but they will probably share more soon.

What do you think of John and Abbie’s announcement? Are you surprised to hear the news? Leave a comment below!

Watch John, Abbie, and the rest of the Duggar family on Counting On when it returns to TLC in October.