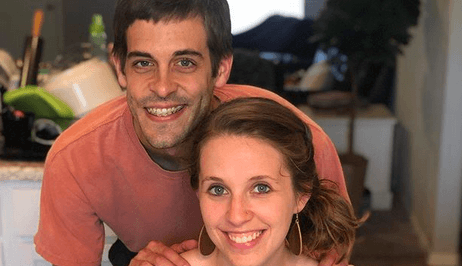 Last month, Jill Duggar and Derick Dillard celebrated their fifth wedding anniversary. They are the parents of Samuel, who just turned two years old, and Israel, who is four years old. As of right now, there has not been any news on another Duggar-Dillard baby.

On Monday, Jill posted a picture for her son Samuel’s birthday. In the caption, she wrote, “Happy birthday to our sweet little Samuel! We love you little man!” In the picture, Jill is holding a homemade cake for Samuel, who is in a high chair. Israel is standing beside his younger brother.

In the comments, some of Jill and Derick’s fans left sweet comments wishing Samuel a happy birthday. His grandparents commented and said, “Happy Birthday from Grandma & Grandpa Duggar! We pray you grow up to be a Godly man who impacts the world for Christ! We love you, Samuel!!”

In the comments, not everything was positive and upbeat. A few commenters noticed a couple of things that they thought were odd. Then, they decided to mom-shame Jill because of them.

In the picture that Jill posted, Duggar fans noticed that she used a disposable cake pan. One fan asked, “Happy birthday little guy. But does this family ever use any reusable dishes. Why always the disposable things.” Someone else chimed in and wrote, “Just a quick question-why does the Duggar family use disposable pans and plates?” In one comment, a fan even said, “This is so corny… why not buy him a cake? Cheap!”

Other fans noticed that Israel is wearing something called a bucket bib. This is a bib that has a little bucket or pocket at the bottom to catch any crumbs. Someone commented, “Isn’t the older boy a bit old for a bucket bib?!?” Then, another user added, “Iz is way to old to be using a bib. Teach him to eat neatly and you won’t have this issue.”

Of course, plenty of fans were there to defend Jill about allowing Israel to wear the bib. Some said that he may have put it on as a joke because it is his little brother’s. Others said that their children would wear bibs at that age too to prevent messes.

This isn’t the first time that Jill or any of the other Duggar family members have been mom-shamed or gotten backlash. At this point, Jill hasn’t done any explaining so she may just be letting it go.

What do you think of the fans’ comments on Jill’s post? Do you agree with these fans? Leave a comment below.

Watch the rest of the Duggar family on Counting On when it returns to TLC in the fall. A date has yet to be announced.