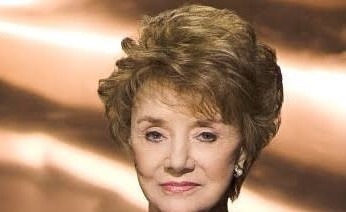 Days of Our Lives has been part of my life for as long as I can remember. I have vague memories of sitting on the floor at the age of four, watching the daytime drama while my mom folded laundry on the couch.

The 1980s were the heyday of soap operas and especially for DOOL. The term “supercouple” is applied to any couple together longer than a month. But back then, it meant years and years of longing and stolen glances before the couple had their splashy soap wedding.

For Days of Our Lives, one of the biggest stories of the ‘80s revolved around the secret that Caroline Brady and Victor Kiriakis had an affair that resulted in a son. That son was Bo Brady. In the ‘90s and later, Caroline became more of a confidante character that offered an ear and advice for characters on canvas.

30 Years on Days of Our Lives

Peggy McCay originated the role of the Brady matriarch in 1983. She played the character off-and-on until her departure in 2016. Peggy McCay passed away in October of 2018. On the show, Caroline developed Alzheimer’s and moved to California to live with her daughter Kimberly.

All told, Peggy McCay played Caroline for over 30 years. Her story ebbed and flowed, but she always gave 100%. She was beloved by her castmates. In fact, Stefan Nicholas (Patch) posted a sweet video on his Instagram of him serenading Peggy a few months before her death.

Frank Parker (Shawn Brady) Passed Away Around the Same Time

As played by Frank, Shawn struggled greatly with accepting that Bo wasn’t his biological son. Shawn died on-screen in 2008 when he gave Bo his oxygen tank on a downing airplane. The actor was facing health problems and decided to retire.

The character of Bo Brady died in 2015 when actor Peter Reckell chose to leave the show. He has come back for an occasional ghostly appearance, but his name hasn’t come up in spoilers for Caroline’s memorial.

Days of Our Lives Pays Tribute

You might wonder why DOOL is just now dealing with a real-life death that happened in October. That’s because the show tapes six months in advance. The scenes they taped immediately following the sad news about Peggy McCay’s death are just now airing.

The tribute to Caroline Brady and Peggy McCay begins the week of June 17 when word spreads through Salem of Caroline’s off-screen death. By the end of the week, fan favorites such as Carrie (Christie Clark,) Sami (Alison Sweeney) Shawn D (Brandon Beemer) and others return to town.

They gather at the Brady pub the week of June 24 for an emotional memorial, both for the characters and the actors, who are facing a very real loss.

As someone who has watched DOOL since the mid-80s, I can’t even watch this clip without tearing up.

Peggy McCay was an underrated actress who graced our screens for over 30 years. While her character hasn’t been on the show for a few years now, she will always be remembered because the Bradys are one of the show’s founding families.