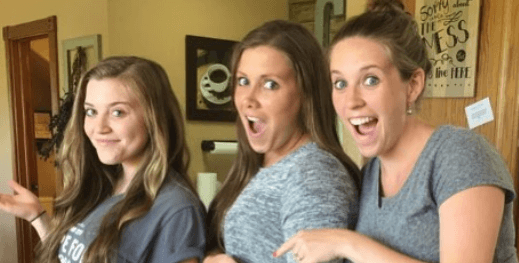 In addition, cousin Amy King is having a baby boy later this year. Ben and Jessa just welcomed their third child, Ivy Jane, into the world a couple of weeks ago. As of right now, these are all the pregnancies that have been announced.

Last Sunday, the Duggar family tragically lost their grandmother, Grandma Mary Duggar. She passed away after slipping into a pool and drowning. Her daughter, Deanna, found her and called 911, but she did not survive.

Since her death, the family members have been posting pictures of their beloved grandmother on social media. They have been writing heartfelt captions about her and how much they will miss her. Jill even wrote a blog post about her grandma.

In Jessa’s post about her grandmother’s passing, fans noticed something somewhat suspicious. In the post, she wrote, “She was so excited about the many new great-grandbabies due this coming fall and winter, and it never got old for her.”

After reading this, fans realized that all of the Duggar babies that are going to be born this year are due in November, which is considered the fall. It seems odd that Jessa would say that one is going to be born in the winter. This led fans to wonder if there is another Duggar who is expecting. Maybe another pregnancy is going to be announced soon.

Who could be pregnant next?

There are only a few married Duggar women who could be expecting soon. Four of the women are currently pregnant and Jessa just gave birth to her daughter a couple of weeks ago.

John-David and Abbie could be expecting a baby. They recently got married and have yet to announce a pregnancy. They have also been inactive on Instagram for a few weeks now. Jeremy and Jinger could be ready to give Felicity a sibling. She will be one year old soon. Jill and Derick could be having a baby in the winter because their two sons are getting older.

Of course, it is possible that Jessa was referring to the pregnancies that have been announced. We will find out soon enough if another Duggar is pregnant.

Do you think that someone else is pregnant? Let us know in the comments!