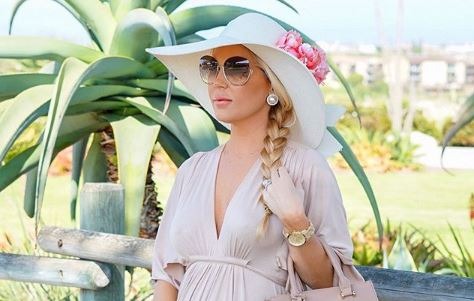 Fans of The Real Housewives of Orange County remember Gretchen Rossi and Slade Smiley. The two are still together and expecting a child. Now, Reality Blurb is sharing that she could possibly lose her home in Orange County. That would be heartbreaking with a baby almost here.

Why could Gretchen Rossi lose her home?

It turns out that the mortgage company accused her of being behind on payments that equal about $26,000. New court documents show this huge amount. Gretchen isn’t on RHOC anymore so she did lose that big income.

The thing is if she doesn’t take care of it soon her house will be put up for auction. This will leave Gretchen and Slade looking for a new place to live. There is not a date set yet for this auction, but it will be set within 90 days. That does give the couple a bit of time to work this out. For now, they are going to need to figure out a way for fast money.

It does sound like Gretchen Rossi could be having a few money problems. Part of the issue might be that she underwent in-vitro fertilization to get pregnant. That isn’t cheap at all. Gretchen had to do it this way, though.

We finally announced our baby girl’s name to all of our guests through our beautiful Baby Shower invitations this week designed by the incredible & talented Tammie from @invitationdesignstudio! Baby Girls name has very special meaning behind it and we did an exclusive interview with @accessonline revealing why! Swipe up in my stories or click link in my bio to find out what her name is and why we are sooo excited about it! 🙌🏻❤️ #Babysnamereveal #Babynames #IVFBaby #soblessed #ThankyouLord #wejustlovehername (swipe left)

Also, the fact that she is not on Bravo anymore means that she lost that income. She bought the house back in 2015. The women on these reality shows get paid pretty well to do them.

Gretchen may have to try to get back on reality television or considering some of the expensive things she has bought herself over the years. So far, the couple isn’t talking about the house going into foreclosure or what they plan to do fix the situation.

Do you think that Gretchen Rossi will end up losing her home? Share your thoughts in the comments below. Don’t miss new episodes of The Real Housewives of Orange County when it returns to Bravo.