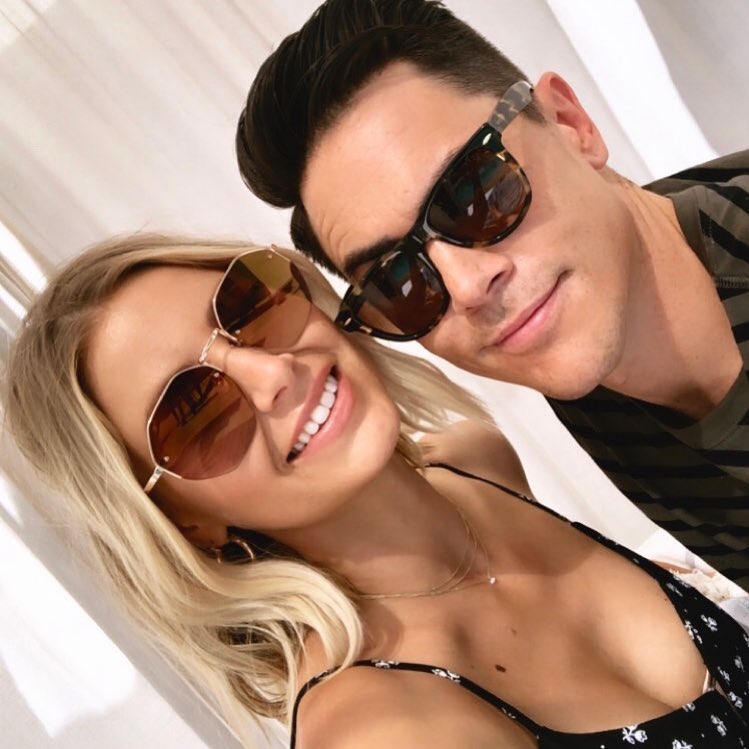 Vanderpump Rules couple Ariana Madix and Tom Sandoval recently bought a house together. So, you’d think that they are raking in the cash from Tom’s new bar TomTom. Viewers of the show know Tom recently opened a bar with Lisa Vanderpump and co-star Tom Schwartz. Named TomTom, the bar has been a huge success. While the cast was in Mexico on vacation, Lisa told Sandoval that the line to get in was down the block.

During a recent visit to a podcast hosted by Danny Pellegrino, Ariana was asked, “Has [Sandoval] seen any money from that?” Ariana immediately responded with a “No” but then tried to backtrack a bit. She said, “Maybe. I don’t know if I should clarify. Am I allowed to say that?” Ultimately, she didn’t clarify the situation and kept “No” as her answer.

Did you see us in the new issue of @people? 🤩🤩check it out in print or online for everything #pumprules!

During the Season 7 finale, Ariana confronted Lisa Vanderpump about how she treats the two Toms by constantly shading them. Lisa simply told Ariana to “lighten up.” During the Vanderpump Rules After Show, Ariana expressed regret for speaking up.

“Literally as the words were coming out of my mouth, I realized that it was a completely pointless endeavor. She’ll never take what I’m saying seriously. I’ll always be her, like, minion, you know? What is the point? All I’m going to do is make her mad,” Ariana said.

Ariana went on to say that Lisa will likely get revenge on her for speaking out. That is an interesting comment if you keep up with what is happening on Lisa’s other show, Real Housewives of Beverly Hills. Lisa is on the outs with all of her co-stars on that show. This is because they all believe Lisa sold a story to Radar Online about Dorit Kemsley to exact revenge on Dorit for her role in Puppygate.

(If you don’t watch the Real Housewives franchise: Dorit adopted a dog from Lisa’s rescue organization. The dog ended up a high-kill shelter instead of being returned to the rescue, as the contract stated.)

Does the Cast of Vanderpump Rules Really Still Work at SUR?

There has been a lot of speculation online that the cast members no longer actually work at SUR unless they are filming episodes. According to Ariana, Sandoval does still bartend at SUR because he likes it and makes good tips. This is a strange development because Lisa “fired” Tom from SUR on the show during Season 7. She said if he wanted to bartend, he could do it at TomTom.

The Season 7 reunion of Vanderpump Rules starts Monday on Bravo. The reunion got so crazy that they broke it up into 3 parts. Rumors have swirled for weeks that there is a physical confrontation between some of the cast.

Frank Fritz Demands Privacy After Suffering Stroke
Camila Cabello Reveals How She Joined ‘The Voice’
Megan Fox 2022 Net Worth Revealed
Lifetime’s ‘How To Live Your Best Death’ Is LMN’s Stranger Danger!
Charli D’Amelio Hopes To Reconnect With Herself During ‘DWTS’