It all starts with Joy Duggar sharing a picture of herself and her husband,  Austin Forsyth. In the caption, she explains that they are going on a weekend trip to a couples’ retreat. She says, “Getting to spend the weekend with my favorite person! Just the two of us!! (Austin’s parents are watching Gideon for us!) ”

The couple looks very happy and like they are enjoying themselves at this retreat in Branson, Missouri.

Getting to spend the weekend with my favorite person! Just the two of us!! (Austin’s parents are watching Gideon for us!) 😍😍😍😍 #refreshingtime #dateyourspouse❤️ #weekendgetaway #livingunitedcouplesretreat @livingunitedcouples

Well, fans were quick to realize that Joy Duggar’s son, Gideon, was celebrating his first birthday this weekend. They began to wonder why his parents wouldn’t be in town for his birthday.

Some of the fans were rude and began shaming Joy Duggar for “missing” her son’s birthday. Other fans were more confused than mean and just asked if it was Gideon’s birthday. 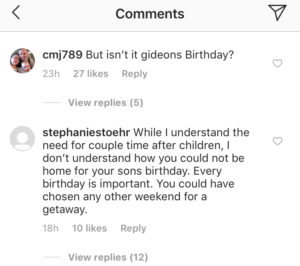 One fan says that the couple “could have chosen any other weekend for a getaway”. While this is true, they were going on a specific retreat, which is probably only offered once per year.

Once Joy Duggar noticed all the hate she was getting, she decided to explain herself. She said, “We’ve only gotten to spend a couple of days away and will be able to celebrate Gideon’s 1st birthday with him when we get home this evening!!”

How did Jessa Duggar stand up for Joy Duggar?

Jessa Duggar has received her fair share of scrutiny from fans over the years. All of the Duggars regularly get comments that aren’t particularly kind. Most of the Duggars don’t make a big deal out of what is being said. Jessa Duggar often replies to rude comments and unsolicited advice. She doesn’t let these comments slide.

When Jessa Duggar saw what people were saying about her sister, Joy Duggar, she jumped in. 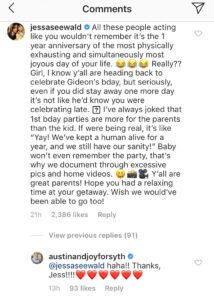 In her response, Jessa Duggar says:

“All these people acting like you wouldn’t remember it’s the 1 year anniversary of the most physically exhausting and simultaneously most joyous day of your life. Really?? Girl, I know y’all are heading back to celebrate Gideon’s bday, but seriously, even if you did stay away one more day it’s not like he’d know you were celebrating late.”

Jessa Duggar definitely knows what to say in this situation. She did a great thing by sticking up for her younger sister.

It looks like Joy Duggar and Austin Forsyth made it home in time to celebrate Gideon’s birthday!

Happy 1st Birthday, Gideon Martyn!! We are so thankful for you and your bright smile that is contagious!!! Mommy and Daddy love you so much!! #1stbirthday #smashcake #somuchlove

What do you think about Jessa Duggar defending Joy Duggar’s choices? Let us know in the comments! Don’t miss Counting On on TLC Mondays at 9/8c.