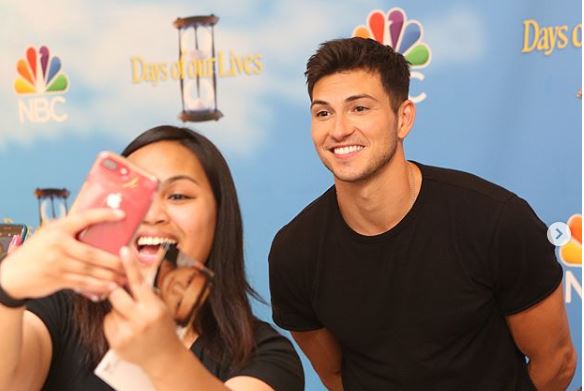 The week of February 4-8 is NOT a good time to be a woman in Salem. Particularly, you don’t want to be the daughter of a legacy soap opera character.

Ben being the prime suspect isn’t unfounded; he was the Necktie Killer, killing multiple people in an effort to frame Chad (Billy Flynn) and keep Abigail for himself. He claims to be reformed after being kidnapped by Sami, but he was recently hired by Chad, of all people, to kidnap Abigail from Stefan’s influence.

Ben then went to Stefan after that attempt to kidnap Abigail failed and asked him for a job as his head of security. Ben’s first task was to kidnap Gabi from the Kiriakis’ mansion. He then was to bring him to Stefan for her comeuppance for changing the DNA test results, making Stefan think he was the father of Abigail’s daughter, not Chad.

Speaking of Abigail and Chad’s daughter, Charlotte is also kidnapped this week! Chad immediately heads to confront Stefan and Ben. He thinks one or both were involved in the kidnapping.

Chad’s not wrong to suspect Ben. It certainly wouldn’t be the first time he kidnapped on of Abigail’s children. Ben kidnapped a pregnant Abigail and took her to a remote cabin where she went into labor. At the time, Abigail thought Ben was the father. After realizing Abigail had been kidnapped, Chad found the cabin and attempted to rescue her. Ben knocked Chad out and took off with the baby after setting the cabin on fire.

It was later discovered that the one-night-stand between Abigail and Chad resulted in Thomas, meaning Ben was not the father.

Jack Reaches Out to Abigail

Jack (Matthew Ashford) hasn’t had much to do with his children since his return. It’s not his fault. He just doesn’t remember them or Jennifer (Melissa Reeves.) However, after bonding with his children during a recent family dinner orchestrated by Chad, Jack reaches out to Abigail after he finds out her daughter has been kidnapped.

Tune in to find out if Jack is successful in connecting with Abigail over her missing child.

It turns out that Ben isn’t the one behind the kidnappings – his sister Jordan is! Jordan (Chrishell Stause Hartley) recently returned to town

Jordan’s intentions are good – she believes Ben is a danger to both Ciara and baby Charlotte and is trying to protect them – but her methods seem to indicate she is as mentally imbalanced as Ben was.

If you’ve ever watched a soap opera before, then you know it is a safe bet that Ben rescues Ciara and Chad rescues baby Charlotte. Reuniting Charlotte and Abigail will go a long way in repairing their fractured marriage.

Make sure you don’t miss new episodes of Days of Our Lives weekdays on NBC.