Ever since Jana Duggar joined Instagram, fans have been speculating about a possible courtship. Typically, the Duggars create social media accounts once they are in a courtship. Fans assumed this was the rule, but it is purely coincidental.

Fans are wondering why Jana Duggar isn’t married yet. She is the oldest of the Duggar girls and recently turned 29- years-old. The Duggars usually get married much earlier than this.

On Sunday, Jana Duggar shared a picture of herself eating macaroni and cheese. Her caption said, “Say cheese!”

In a comment, Lawson Bates left three smiling emojis. These were likely in response to Jana Duggar’s caption.

Of course, her fans had other thoughts. For a while now, fans have been questioning her relationship status. If there is a chance at her being in a relationship, they are ready to be the first ones to spot it!

Immediately, her followers began commenting and asking if the two are courting. 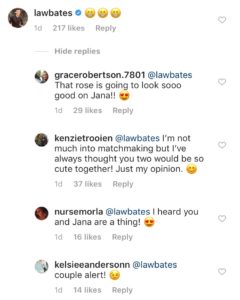 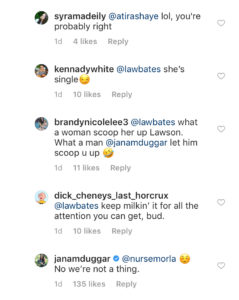 One particular follower commented saying, “@lawsonbates I heard you and Jana are a thing!”

Jana Duggar was quick to react to these rumors. She left a simple response for her fans and said, “No we’re not a thing.” Is her fast reaction a sign that something is actually going on between the two?

It seems that Duggar and Bates’ fans have been “shipping” the two for a while now. They can’t wait to see them together if it ever happens.

Another sign of a Jana Duggar and Lawson Bates courtship

The rumors about the two have been going on for a while now. They recently became even more intense when the Bates’ family’s Instagram page liked a comment suggesting that Jana and Lawson are courting.

There is a chance that the comment was liked accidentally. Nonetheless, fans were quick to notice.

Even though this rumor didn’t last long either, Duggar fans won’t forget that it happened!

If Jana Duggar and Lawson Bates are a thing, we will probably find out pretty soon. Duggar fans think it’s about time for Jana Duggar to get married. Maybe she is taking another path though!

Do you think that Jana Duggar is telling the truth? Is there a chance that she and Lawson Bates could actually be a thing? Be sure to catch Counting On when it returns to TLC in February!