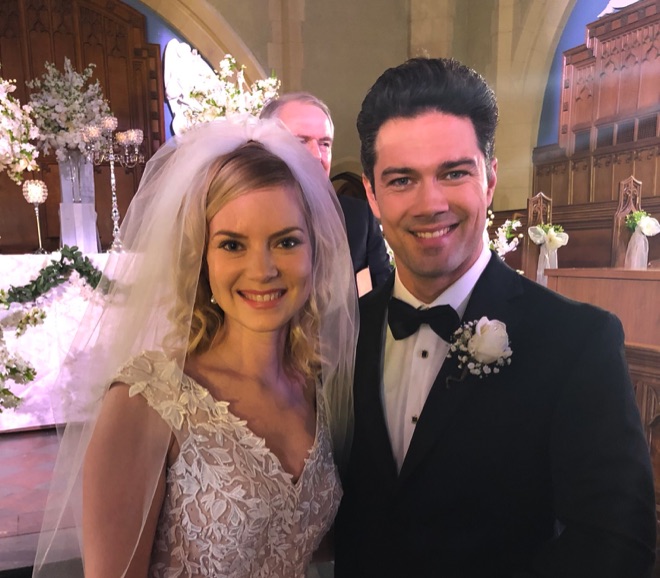 Do you think you know everything about Ryan Paevey? You cried over him as Nathan West, in his heartbreaking General Hospital funeral, and swooned over him as Donovan Darcy, in the Hallmark Darcy movies. You may know he speaks both Japanese and French and rides a motorcycle. You may even know he designs jewelry and has created a site called Fortunate Wanderer. Maybe you even own one of his beautiful pieces of handmade jewelry!

Now it is time to test your knowledge of the star of upcoming Super Channel Heart & Home romance, BFF Bride.

When Ryan was on the On The Rocks Radio program, he was asked who his dream co-star would be. He had no problem saying that it would be Kate Beckinsale. The Unleashing Mr. Darcy star even claimed that he would “work for free” in order to act with the gorgeous Underworld action star. He also revealed that one of his favorite movies is Seven Years In Tibet, and that would be a dream role.

Ryan’s Special Relationship With His Mom

Ryan revealed that his relationship with his mom Linda is really special. Most of all, he enjoys taking good care of her, including indulgences like a lobster on the beach. As for his mom, he has revealed that she sometimes goes all out “Martha Stewart,” and will create an elaborate Christmas. Mom Linda will deck out her house with garlands and lights, even if there are only three people there. Sounds like a Hallmark movie! He has also revealed that his mom will “freak out” when she sees his grey hair, as it means that she is getting older too.

Ryan Eats All Of The Time

Despite being quite trim, Ryan admits that he eats all of the time, and he especially loves tart food, particularly Gummy Bears. Don’t put them into vodka or dilute them in any way, as he would be repelled by soggy Gummies, as he has a texture issue. It should also be noted that the buff Marrying Mr. Darcy star believes that health is both physical and mental.

The Talent That Helped Him Get General Hospital Gig

Ryan revealed that he has a photographic memory, and this helped him remember his dozens of pages of lines each General Hospital episode. Always a bit self-depreciating, he has shared that he believes that this photographic memory is what got him the gig as Nathan West, more than his actual acting prowess. When asked about working a hectic Hallmark schedule, he made it clear that in comparison to working a soap, the three weeks of filming for a Hallmark movie is much easier.

Who Is Ryan’s Most Fun Character To Play?

Ryan was also asked which of his characters was the most fun to play. He seemed to hem and haw just a bit. Then, Alexander Rodriguez, host of On The Rocks Radio asked if he liked playing Donovan Darcy. Ryan flashed his dazzling smile and confirmed “I like Darcy. Darcy is high on the list.”

What is your favorite Ryan Paevey role? Did you learn something new about the Hope At Christmas star? Please share your opinions and comments below. Make sure to stop back for more Ryan Paevey news and movies.