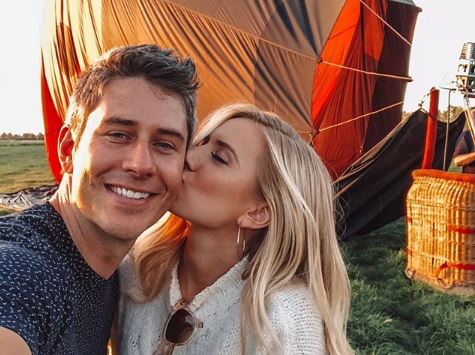 Last years Bachelor Arie Luyendyk Jr. did a little switch up when he picked the wrong girl for him. He chose Becca Kufrin on the show, but then later realized that he wanted to be with his love, Lauren Burnham. So, Arie broke up with Becca on live television in May of 2018. Now Arie and Lauren are soon to be married and they are expecting their first child, how exciting? How soon is the couple tying the knot? Well, it’s actually in just a couple of days and fans are more excited than ever.

They are going to get married January 12, 2019, which is super soon! Lauren had a bridal party back in August of 2018 in her hometown including her close friends and family. She based the theme of her bridal party around their Hawaiian themed wedding. They had pink and white cookies while enjoying classical Hawaiian foods. The two are kicking off their wedding by taking a helicopter tour around Hawaii in January before they say the famous “I do”. How romantic? Check out the Instagram pics below.

Finally took @laureneburnham on a proper @bachelorabc helicopter date. With a stop for sparkling cider of course! . . . 📸: @nvmauimedia 🚁: @bluehawaiianhelicopters #flybluehawaiian

Will it air on television?

If you were excited to see the wedding you’re in for some bad news. Sadly, Arie revealed in May of 2018 that their wedding will not be televised and it will be private. However, Chris Harrison revealed that he would be officiating the wedding just like he has for many other couples from the previous seasons of the show. Jade and Tanner Tolbert were one of the famous couples who had the tv show host tie the knot for them.  They will only have about 100 guests at the wedding, including close friends Sean Lowe and Catherine Giudici. Sean and Catherine have been sharing about their big trip on social networks. If you were wondering ex-fiance Becca Kufrin will not be attending the wedding, that would be awkward! Hopefully, they end up sharing a lot of pictures from the wedding.

Fans are very excited to see the future of this couple with their new marriage and the new child they are expecting. If you didn’t know the gender already, they are going to have a beautiful baby girl and they are ecstatic! Fans of The Bachelor are also excited to see who Colton Underwood ends up with in the end. Stay tuned and watch the new season on ABC.