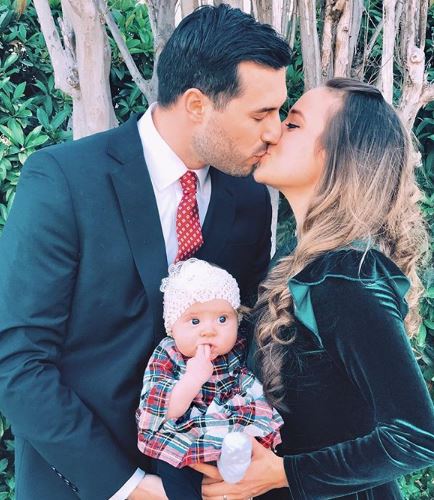 Today great news came out when Jessa Duggar Seewald is expecting her third child with her husband Ben Seewald. Now, this is causing a bit of speculation that her sister Jinger Duggar Vuolo could be pregnant as well. Recently, TV Shows Ace shared with you that several of the Duggar girls went to Amy Duggar King’s new clothing store.

Along with this, there was a picture of the girls. They had been shopping and two of the girls were holding bags in front of their stomachs. At the time, TV Shows Ace didn’t notice, but now after Jessa revealed she is pregnant there is something you can’t miss.

Finally made it to @3130clothing ! 🙌🏻 Super excited for my cousin @amyrachelleking to have opened her own boutique! 💜 . . . #cousins #3130clothing #boutiqueclothingshop #nwa #loveshoppingwithmysistas #sweettimes #homesweethome #arkansasgirl

Jessa and Jinger are both holding bags in front of themselves like they are trying to hide something. Jessa, of course, was hiding her baby bump. Jinger could have been hiding a bump or could have been doing it so it wasn’t obvious that Jessa was holding one in front of her.

Now if you go to the second picture, Jinger Duggar Vuolo shows herself from the side. She looks a lot smaller in this picture. The way that the dress fits her it would be pretty easy to hide a bump if it was a very little one. The fans were still talking in the comments about how they think Jinger might be hiding a baby bump. For now, fans will have to wait on Jinger to say something.

If Jinger is pregnant, you can assume she isn’t as far along as Jessa. Two Duggar girls wouldn’t make an announcement about expecting a baby at the same time.

Do you think that there is any chance that Jinger Duggar Vuolo is expecting again? Share your thoughts in the comments, and don’t miss new episodes of Counting On when they return to TLC on February 11, 2019.

‘Bold And The Beautiful’ Star Ashley Jones Returns To Lifetime For LMN Thrillers
‘Today’ Why Are Hoda Kotb & Savannah Guthrie Feuding?
‘Blue Bloods’ Fans Want Sergeant Renzulli Back, Will Execs Cave?
‘Big Brother’ Spoilers: Who Is On The Block This Week?
Crunchyroll Renews ‘Tower Of God’ For Another Season