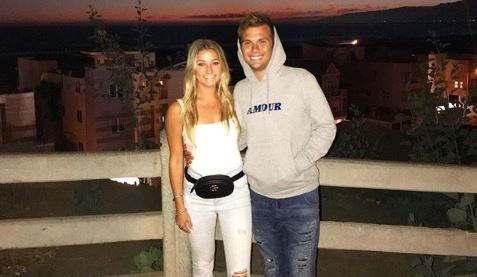 Chase Chrisley has a girlfriend and it is obvious these two are serious. Chase is now dating Lindsey Merrick and his family is embracing her. Todd Chrisley recently went to his Instagram page to introduce her to the world. He didn’t hold back either saying that the family loves her already. Todd can’t be an easy person to win over either.

Lindsey Merrick is a gorgeous blonde that Chase has fallen for hard. They are both constantly sharing photos of each other on social networks. As you can see below, she even gets along with Grayson Chrisley. Todd shared that they are “blessed” to have her in Chase’s life. Lindsey seems to fit in great.

Chase Chrisley has been with Lindsey Merrick for several months. He has been posting about her on Instagram for a while now. You know that Chase didn’t start posting until he was sure things were serious. He is not one to share every random girl on his social networks.

Todd Chrisley also posts about his daughter Savannah Chrisley’s boyfriend. She is dating Nic Kerdiles, a professional hockey player. It looks like both of the older Chrisley children have found love. It wouldn’t be surprising at all if engagements and weddings are the next thing that ends up happening. This is a big change, but both have been out of high school a while and seem ready for bigger things.

This just makes me smile , I’m so thrilled to formally introduce to the world one of the sweetest souls around , we are so blessed to have this young lady @lindseymerrick in @chasechrisley life, we love you sweet girl ..

This does look like true love. Fans are excited to continue to get to know more about Lindsey Merrick. They do look great together.

What do you think of Chase Chrisley’s new girlfriend Lindsey Merrick? Share your thoughts in the comments section below, and don’t miss new episodes of Chrisley Knows Best when they air on USA. Also don’t forget that Chase and Savannah have a new spin-off coming soon.