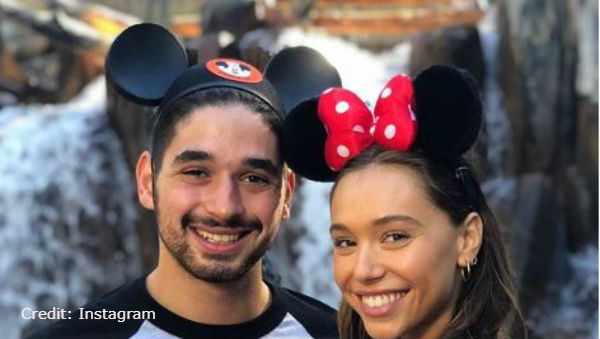 Dancing With the Stars has had several great showmances. It looks like Alan Bersten is the one falling in love this season on DWTS. There have been a lot of rumors about Alan and his partner Alexis Ren. He is even admitting to “falling in love.” Those are some pretty big words to reveal on national television.

Alan Bersten speaks out about his feelings

People shared the details about what is going on with Alan and Alexis. In a clip from Monday night’s show, Alan opened up. Normally, these showmances try to stay quiet. They don’t reveal what is going on until the season is over or don’t admit to it at all. Alan Bersten of Dancing With the Stars didn’t hold back. Here is what he had to say last night in a clip where he is talking to Alexis.

“Last week, some things were said. I’m in a place where, we worked so hard for this amazing journey together, and I’m afraid I will mess that up in some way. But I’ve never had an experience like this. It’s so easy to just hang out with you and have fun and not worry about everything else. I know that you put yourself out there last weekend, and I do have feelings for you. And I really feel like I am falling for you.”

Country night!!! Woooohoooo thank you everyone for keeping us safe and getting us to the semi finals!!! We’re so excited to dance for you one more week!!!! I can’t believe it!!

Can this love last?

They both seem really happy that the truth is out there. Alexis and Alan even showed a cute kiss. It will be interesting to see if this couple is able to make it last once their time on Dancing With the Stars is over and they go back to their normal lives. For now, Alan Bersten is riding the wave and falling in love hard.

Right now, it looks like this love is going to last at least a while, but the real problems will come when life gets in the way. Maybe Alexis and Alan will end up on the DWTS Tour together. That would make things a lot easier for them. Alexis is from California, which is where Alan films, so that will make things easier as well.

Make sure you don’t miss the new episodes of Dancing With the Stars when they air on Monday nights on  ABC.