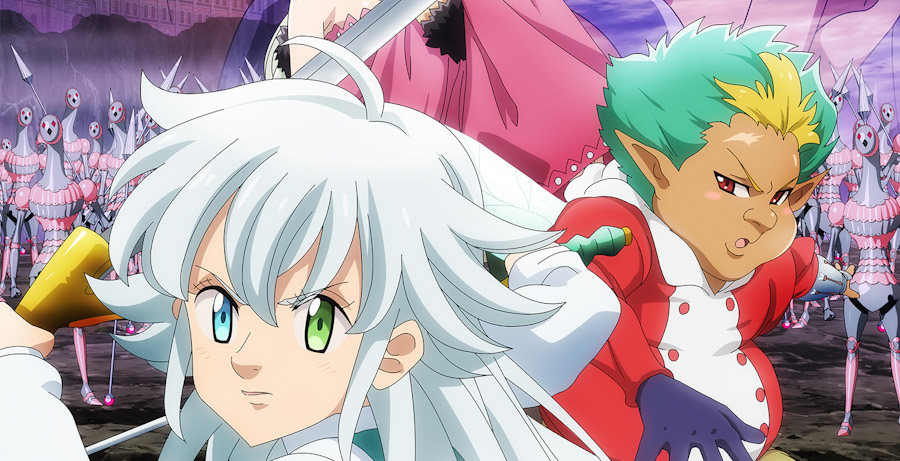 The Seven Deadly Sins is finally coming back to Netflix in a new way. While the whole main series has been available to stream, fans are finally seeing a return to content set in the world of the show with its first spin-off. It is called The Seven Deadly Sins: Grudge Of Edinburgh and we just recently got the official poster for Part 1 from Netflix. The release date is just around the corner, so let’s take a look at the poster and some of the details surrounding this new addition to the Seven Deadly Sins universe.

The Seven Deadly Sins: Grudge Of Edinburgh will follow the son of Meliodias: Tristan. On the poster, we can see Tristan in a fighting position in the front with both of his parents Meliodias and Elizabeth in the back.

On December 20th fans are getting Part 1 of what Netflix is calling a “two-part anime film”. The premise, at least for Part 1, is that House Liones is attacked by a mysterious force. Tristan’s mother Elizabeth is gravely hurt and, as a result, the boy goes out on a journey to save his mother. The official trailer for Part 1 came out a few weeks ago. Now there is a poster along with the release date.

It would seem that the biggest obstacle for this film right now may be its own fanbase. The Seven Deadly Sins fans seem less than thrilled with a lot of the parts that they think are going to add up to a lackluster final product. Firstly, this film is not based on any kind of manga. The creators are going completely off-script with this and trying something never written by the original author, Nakaba Suzuki. Secondly, the animation, at least what is seen in the trailer, appears to be heavily 3D.  Hopefully, the end result is something better than what fans are expecting right now.

The Seven Deadly Sins was the first foray into anime for the streaming giant, Netflix. Ever since its success, they’ve gone all in on all kinds of new anime shows and manga adaptations. Everything from Jojo’s Bizarre Adventure to the recent live-action adaptation of Alice in Borderland. Some have been better than others (the live-action remakes of Death Note and Cowboy Bebop are notable failures), but overall fans are happy with Netflix’s contribution to the anime world. Hopefully, this new Seven Deadly Sins can live up to the legacy of the main series and we can continue seeing new content from the franchise in the future.

Part 1 of The Seven Deadly Sins: Grudge Of Edinburgh will be available to stream on Netflix on December 20th.