Today show host Savannah Guthrie and Hoda Kotb are taking a break from their regular job to be a part of the BravoCon panel. As fun as it was seeing the journalists share the stage with Andy Cohen, it was Savannah’s stunning outfit that grabbed eyeballs. What did she wear at BravoCon? Keep reading to find out the details!

Savannah Guthrie Poses Alongside Andy And Hoda At BravoCon

On Friday, the 50-year-old ran the panel with her co-host Hoda as they indulged in a Q&A session alongside Andy Cohen. Before proceeding to the stage, the NBC journalist shared several BTS pictures and videos with her Instagram followers. In one of the pictures, she posed alongside Andy and Hoda as the trio smiled at the camera.

As per The Sun, Savannah wore a sultry, low-cut black dress that fell past her knees. The mother-of-two paired the dress with a black leather jacket, gold necklaces, and black leather boot heels. On the other hand, Hoda flaunted an all-pink outfit paired with gold jewelry and tan heels. The picture was captioned, “BravoCon!! With @hodakotb and @bravoandy.”

Apart from showing off her stunning outfit, the Today show host posted some BTS videos with her co-host. In the video, the host walked through the venue surrounded by security and their team. As she passed through the venue alongside Hoda, they waved to fans and looked in awe at the turnout at BravoCon. She wore a long white coat and captioned the post, “BravoCon, it’s a wow.”

In another BTS video, Hoda and Savannah sat in a golf cart that took them to the BravoCon stage. They passed by Andy’s golf cart as Hoda started cheering, “Go, Andy, Go Andy!” 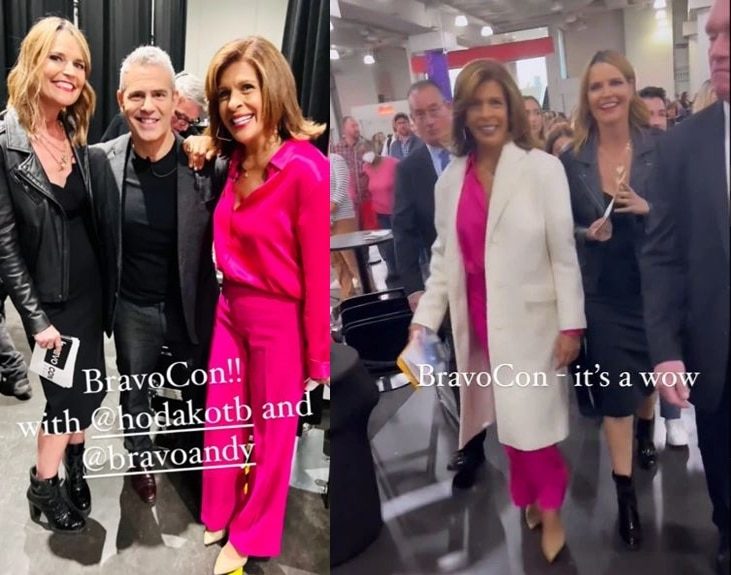 As she leaned towards her transportation, Savannah added, “It’s Bravo time!”

Hoda and Savannah announced last month that they will host the BravoCon panel. They were tasked with roasting Andy for some juicy gossip while moderating the Ask Andy panel. BravoCon is a three-day convention that hosts some of the most popular stars from the network.

Hoda Kotb Breaks Down During An Emotional Segment

Andy Cohen took some burning questions from fans while Savannah and Hoda served as the moderators at the NYC panel on Friday, Saturday, and Sunday.

During the convention, Hoda Kotb broke down in an emotional segment. An audience member shared an emotional story of her daughter who died in a drunk-driving accident after which the Today host couldn’t control her emotions. The devastated mother shared, “Several years ago, I lost my daughter in a drunk-driving crash. I don’t sleep very well, but your shows have sustained me.”

As the 58-year-old wiped off her tears listening to the tragic tale, she hugged the mother in an effort to console her.

What do you think of Savannah’s BravoCon all-black look? Share your thoughts in the comments!