A Bringing Up Bates inside source is spilling details about who Erin Bates Paine really is. The source claims to know the Bates family and the Duggar family too. They revealed some interesting details about Erin’s personality and fans may be surprised to hear it.

In the past, fans have talked about what the Bates family members are like in real life. Recently, someone met Lawson and Tiffany Bates and posted about them on social media. But until now, fans didn’t know much about Erin Bates off social media.

This weekend, a childhood friend of Anna Duggar answered questions about her in the Duggars Snark subreddit. The Duggars and Bates have been friends for years. So, while the questions were mostly about Anna, the Bates family was mentioned as well.

At one point, a Reddit user mentioned that there are rumors about Anna being rude. The source claimed that Anna didn’t come off that way, but some of the other Duggars and Bates girls did.

Then, the source revealed that Erin Bates is one of the “rudest” of the Bates kids.

You can read the full conversation below. Unfortunately, the source didn’t provide any context or examples for Erin’s alleged rudeness. While the insider was friends with Anna and some of the Bates and Duggar family members, it’s unclear how close they were or for how long they knew each other. 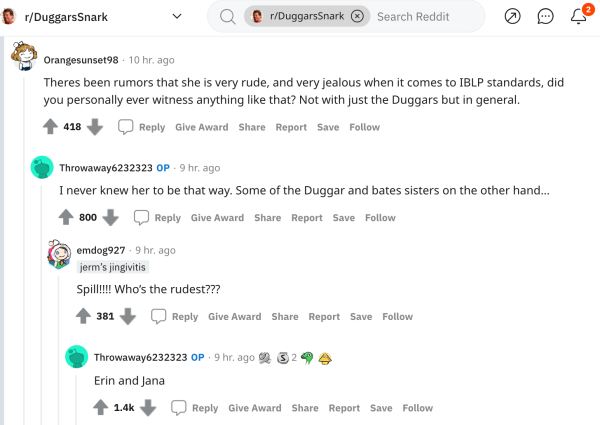 Keep in mind that this person is anonymous and it’s unknown who they are. The Duggars Snark subreddit did verify the user and required proof that they know the Duggars. However, that proof is not public so fans should take this information with a grain of salt.

So, what do you think of this new information about Erin Bates Paine? Do you believe it or do you think it might be an exaggeration? Sound off in the comments section below, and come back to TV Shows Ace for more news about the Bringing Up Bates family.

The Alternate Ending Of ‘The Walking Dead’ Is Shocking
Julie Chrisley Roars: Chloe Is Her Daughter NOT Granddaughter
‘Game Of Thrones’ Alum Cast As Key Villain In Disney+’s ‘Loki’
‘Alaskan Bush People’ Sees Rain Brown Ready To Return To Show
Larsa Pippen Goes For A Spin In Skintight Tank Top