Is the Bringing Up Bates family pursuing damage control on TikTok? After recent action on TikTok, fans are beginning to think that the Bates family might be trying to improve their image after a controversial video was previously posted online. Keep reading to get all of the details.

If you’re a Bates fan, you may recall the family posting a controversial video on social media last year. Carlin Bates happened to be recording videos while at a family game night and posted them on her Instagram Stories. One comment got the family a lot of backlash.

During a game of charades, a couple of family members were acting out the word “hunting.” Someone guessing called out, “George Floyd.”

It’s unclear who said this, but fans think it might have been Nathan or Trace Bates. After seeing this, fans demanded that UPtv pull the plug on Bringing Up Bates. 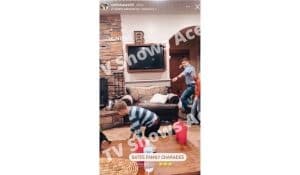 After receiving backlash, Carlin apologized to fans who reached out to her directly and she also removed the video.

Shortly after this, UPtv canceled the show. At this point, it’s still unclear why the show was canceled, but many fans think it has something to do with this video.

Now, fans think that the family might be going further to clean up their image.

On Reddit, a fan said they previously posted the charades video on their TikTok account. However, it was recently taken down. The fan wrote, “Tik Tok says it violated community guidelines for bullying. I wonder if a BATES family member reported it. It had like 7000 views.”

One Bringing Up Bates fan speculates, “Could be Lawson or another family member on the prowl.”

They also wonder if the family has “hired damage control.”

The future of the family’s show is unknown, but fans wonder if taking down this video is a step toward getting another show.

Fans have been hoping that another network will pick it up, but at this point, the show has not been rebooted. Whitney Bates recently reminded fans that it’s mostly up to Gil and Kelly.

So, do you think that the Bringing Up Bates family was behind this video being taken down? Or do you think it was someone else on TikTok instead? Sound off in the comments section below, and come back to TV Shows Ace for more news about the Bates family.

My "George Floyd" tik tok was taken down. from BringingUpBates