Hailey Bieber has been a part of Kim Kardashian’s inner circle for quite some time. Therefore, the duo recently cherished their friendship over a game of Truth or Shot.  They chugged several shots of Kendall Jenner’s 818 Tequila at Kim’s home. The SKNN owner had previously claimed that she doesn’t drink a lot. However, this might be an exception she made for her close friend.

On Tuesday, the Keeping Up With The Kardashians alum took to her Instagram Story to reveal that Hailey Bieber is her drinking buddy for the day. In the picture, the 25-year-old posed alongside the 818 Tequila bottle and a shot glass.

Kim captioned the story, “@haileybieber, who is a longtime friend and confidant, really just always aims to tell the truth and got me to take 5 shots in ‘truth or shot’ today. She is my favorite drinking buddy.”

She also added the hashtag “#whoisinmybathroom.”

A Reddit user reposted the picture in a popular subreddit dedicated to the Kardashians. That’s where fans chimed in on what they felt about their Truth or Shot game.

Tapping in on the fact that it was Kendall Jenner’s booze, one user wrote, “You know Kim messed up when she hyper promote for free.”

“This is her apology to Kendall,” quipped another. 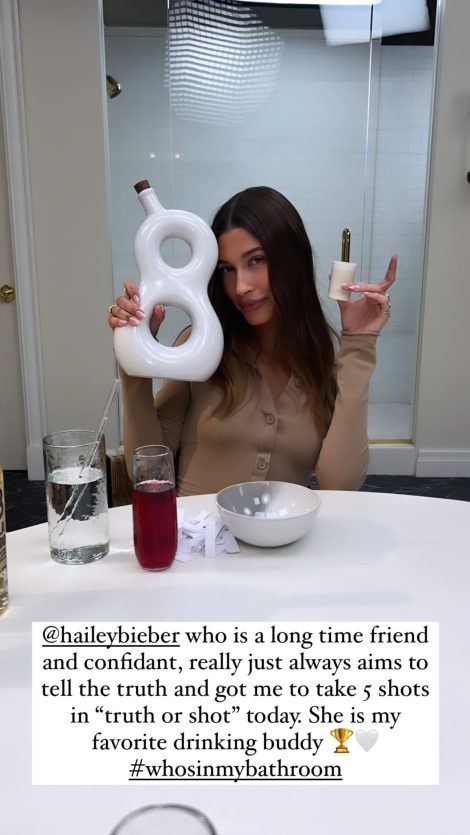 A third user commented, “I can’t wait to see this episode, Kim has always had a funny shot/drinking face to me.”

Talking about Kim’s previous claims that she doesn’t drink much, a fourth user chimed in, “5 shots is a lot for someone who insists they’re ‘not a drinker’. I regularly drink a cocktail or two or a beer, and 5 shots would have me plastered.”

Some Kardashian fans even showed concern that Kim’s weight loss paired with that amount of booze might be a bit too much. Similarly, one concerned user commented, “She probably doesn’t each much, which would make it way worse too.”

Another agreed, “I cannot believe she did 5 shots. She’s lost so much weight lately 5 shots would practically put her in a coma.”

Kendall Jenner Feels Her Family Narratives Are Out Of Line

As per The Sun, this friendly post by Kim comes amid an alleged BTS family drama. Rumors are doing rounds that state that the SKIMS owner and her sister Khloe Kardashian are feuding. The Good American owner recently shared a teaser of the upcoming season of Hulu’s The Kardashians.

In the short clip, Kendall was seen talking about her family dynamics as she said, “The narrative is so out of hand about me and my family… There’s just no changing it.”

However, some rumors might be on point as Steph Shepherd, a longtime friend of the Kardashians, reacted in the comment section.

She said, “Oh, I love you walking the wrong way in Miami… Kim just leaving us in the dust.”

Do you think the Kardashian sisters are really feuding? Share your thoughts in the comments!