The Kar-Jenner sisters have always been competitive, especially Kim Kardashian when it comes to seeking media attention. However, one Kardashian sister has been doing her best to distance herself from the famed family. The Poosh owner, Kourtney Kardashian, is seemingly disassociating from her siblings.

Rumors of the sibling rivalry started when Kylie celebrated her 25th birthday on August 10. The Kylie Cosmetics owner posted a clip from her birthday bash on a giant yacht on TikTok. The festivities included a special fireworks show along with the opening of personalized presents & a lot of liquor. As per The Sun, her sister Kim was a part of this drinking circle and downed a shot with the mother of two before spitting it back.

However, fans quickly took note of the fact that Kourtney was missing from the birthday bash. They wondered why she & Khloe Kardashian ditched her sister on her big day. However, this wasn’t a one-off event when Kourtney distanced herself from her sisters, especially Kylie and Kim.

While Kim & Kylie have been showing off their private jets as fans slam them for polluting the environment, Kourtney has come up as the wise one. Kim owns an 18-seater private jet worth $150 Million, and Kylie owns one that cost her $72 Million.

However, Kourtney has been raving about the benefits of flying commercial, joining in on the backlash. The 43-year-old shared a clip from her private suite at the LAX Airport. She stayed there before getting on a commercial plane. The Poosh owner filmed the bedroom, toilet, & living room from her suite and showed it off on her Instagram Stories.

She captioned the post, “Obsessed with flying commercial. I love raiding [the suite’s] snacks & toiletries.”

Kourtney has always been very open about her environmentally conscious decisions. In the past, she has also taken part in taking measures to protect the planet, unlike her sisters. She also revealed on social media that she has always done her own makeup and hair, keeping things minimal.

Recently, she shared a picture of herself flaunting a pink trench coat & black dress. The TV star was headed out to see her husband Travis Barker’s Cleveland concert. 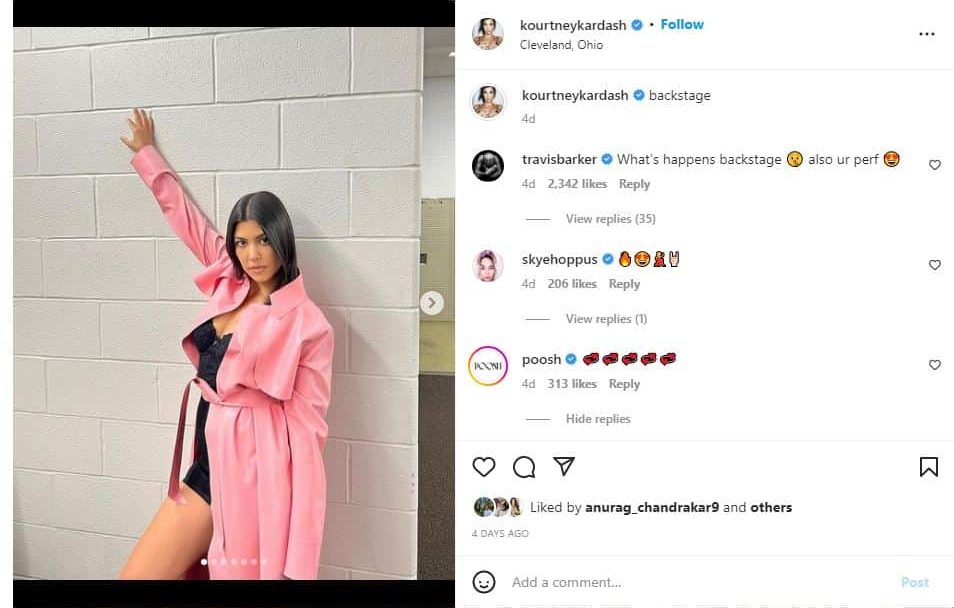 She also shared the post on her IG story and added the caption, “I did my own hair and makeup here, the same ways I always do it super minimal.”

The post seemed like a dig at her siblings, who always need a team of hairstylists and makeup artists to aid them with their routine. Moreover, Kourtney is also comfortable showing off her natural skin sans makeup. Time and again, fans have praised the 43-year-old for not fixating on perfection.

Do you think Kourtney Kardashian is really isolating herself from her sisters? Share your thoughts in the comments!