It has been about six months since Kylie Jenner and Travis Scott welcomed their son. However, the couple has been very secretive about their second child. So much so that they haven’t even revealed his new name in public. Of late, Kylie has been spending gala time with her daughter Stormi Webster. She visited London with her 4-year-old and even indulged in lavish shopping sprees. But, her son was M.I.A. from these key family moments due to which fans have bashed the reality star.

However, looks like the Kylie Cosmetics owner has snubbed the trolls with her latest Instagram story. The mother of two shared a boomerang clip as she took a walk with her son on the lawn grass.

However, she was clever about not showing her son’s face. She captured the clip in a way that only showed his legs and nothing else.

She captioned the post, “Morning,” followed by a beautiful blue butterfly.

Fans reacted to this post and shared their opinion on Reddit as the OP wrote, “Kylie said she heard y’all say she forgot about her son.”

A fan quipped about the situation and said, “Waiting for comments saying his name is Butterfly Effect Webster.”

“Remember when people were guessing ‘Mariposa’ for Stormi’s name?” mentioned another.

A third fan speculated, “Doesn’t their season two start in a few weeks? I’m guessing at this point they’re saving the big reveal and his name for that. It would be her storyline. She wouldn’t have to discuss her relationship or Travis or any other thing that she doesn’t want to.”

“Maybe his name is Feet or Toes because that’s all we’ve ever seen of him,” joked a fourth fan.

Did Kylie Jenner Hint At Her Son’s New Name?

Kylie and Travis initially named their son Wolf Webster after his birth in February. However, they didn’t keep the original name and changed it just weeks after. As per Kylie, the name didn’t fit his son. Since then, the reality star hasn’t yet revealed her son’s name. Fans have been speculating on a possible name for quite some time. 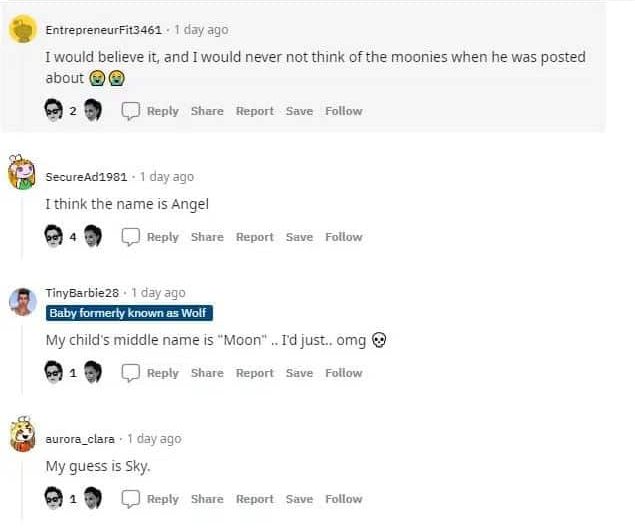 Recently, Kylie shared a picture of the moon on her Instagram story. However, it was devoid of any stickers or captions. It was a simple raw picture of the night sky with the moon shining bright. A similar picture was shared by Kourtney Kardashian as well. Fans thought of this as a hint and started speculating that Kylie’s son’s new name was Moon Webster. However, as it turns out, it was a simple admiration post of the full moon event.

What do you think is Kylie Jenner’s son’s actual name? Do you think she will ever reveal the details in public? Share your thoughts in the comments!