Duggar fans have figured out which Harry Potter house Jessa Seewald would belong to. Based on her personality, fans believe she’s a perfect fit for one of the four fictional houses.

According to a former member of the Institute of Basic Life Principles, Harry Potter was banned. So, it’s safe to assume that the Duggars don’t read the books or watch the movies because they are a part of the IBLP.

Though the Duggars may not like Harry Potter, some of their fans do. Keep reading to find out which house Jessa might belong to, according to fans.

In the past, fans pointed out that Jessa Seewald’s son, Spurgeon, looks like Tom Riddle, a Harry Potter character. Fans also talked about how the Duggar kids are missing out on a book filled with “love, loyalty, kindness, and friendship.”

One photo, in particular, made the comparison very clear. You can see it below. 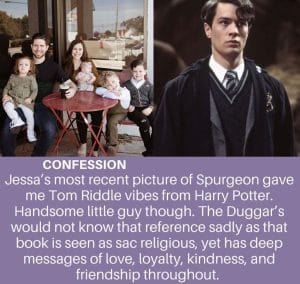 Now, fans are talking about Jessa and her perfect Harry Potter house.

In a new post on the Duggar Bates Confessions Instagram page, a fan shared which house they think Jessa belongs in. In the Harry Potter books and movies, there are four houses at the Hogwarts School of Witchcraft and Wizardry. The houses include Gryffindor, Hufflepuff, Ravenclaw, and Slytherin.

“Jessa is such a Slytherin.”

Many other fans are adding to the conversation and they agree with this statement about Jessa Seewald. One fan says, “By far the best confession I have ever read, full agree.”

Another adds, “Omg that is funny because it’s so true!!”

Someone else says, “Lmao it’s true though.”

Plenty of others got a good laugh out of this confession. It looks like many feel the same way about Jessa being a part of Slytherin.

According to the Harry Potter Fandom site, the Slytherin traits include resourcefulness, determination, pride, cunning, ambition, and self-preservation. So, fans must see some of these traits in Jessa. No one has pointed out specific examples yet, but fans do seem to be on the same page.

So, do you agree that Jessa Seewald belongs in Slytherin? Or do you think a different house would fit her better? Sound off in the comments section below, and come back to TV Shows Ace for more Duggar family news.