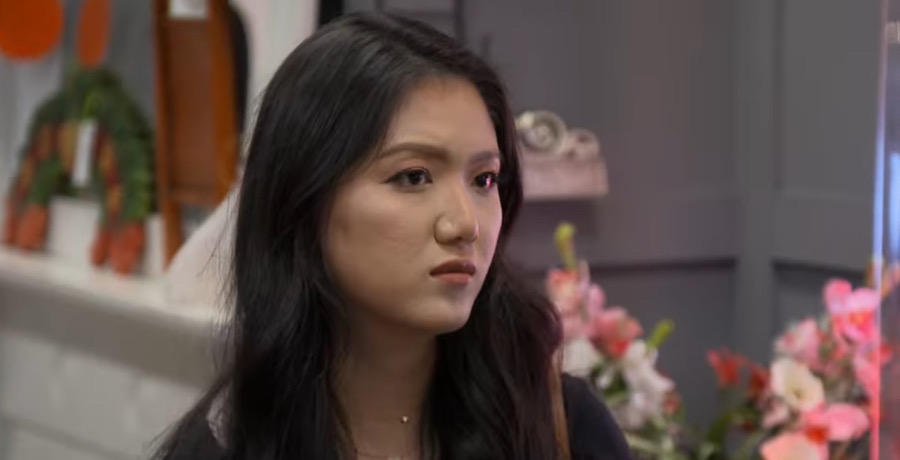 Last week on I Love A Mama’s Boy, Kelly met Matt’s new girlfriend, Brittany. Of course, she had to interrogate her an uncomfortable amount. Brittany was able to hold her own, which was great but it was still a little awkward. Laila and Emily are trying to work together though she still thinks her son should be with Yussra. Robert and Kristy are still at odds over Nancy’s request for the DNA test. Finally, Ethan and Esther were introduced and they are Kelly and Matt times ten. It is time for Ethan and Leyna to start wedding planning but whose wedding is it really?

Abbey Contemplates Tre On I Love A Mama’s Boy

After Tre ditched Abbey for his mother Lorenda on Valentine’s Day, it has not been easy. Yes, it was also Lorenda’s birthday but Tre has no consideration for his girlfriend at all. Now, Abbey and Lorenda are meeting up at Abbey’s mama’s tea shop so she can give Lorenda a birthday gift she has been holding on to. She always gives her a gift since it is her child’s grandmother so this is a level of respect. Abbey also wants to try to talk to Lorenda, she appreciates all that she does for them. However, she and Tre are trying to have more one-on-one time. So, she would like Lorenda around less.

Lorenda fears that Abbey cannot do everything that she does. Yes, Abbey and Tre are much more laid back and they can and will leave dishes in the sink. This makes Lorenda start to have anger and pace. A few days later, Lorenda comes to Abbey’s boutique to return the gift she gave her. She models a bunch of items and picks something she likes but Abbey does have to talk to Tre about paying more attention to her.

Now that Emily and Laila are getting along better, Shekeb feels they should decorate more. He wants antique decor as he feels this is what would appease his mom. Shekeb takes the opportunity to tell Emily about his “date” with Yussra. He maintains that he was just doing his mother a favor. However, Emily remembers a time when Laila set him up on a blind date. Plus, she does not like how Shekeb discussed their relationship with Yussra. She feels like this was a little bit more than a favor and she was just really nice to Laila on top of it all. He claims he met her once but does think he might go to the gym with her.

Emily is shocked that he would even go out with her again. More so, Shekeb thinks that Yussra and Emily should have coffee together. Emily calls Laila a sneaky little snake to which Shekeb says she is a snake. She finally goes to see a friend to share what had transpired with Shekeb and Yussra. Emily is encouraged to go meet with Yussra and to kill her with kindness.

Matt Has A Big I Love A Mama’s Boy Night

It’s a big night for Matt as Brittany will be sleeping over for the first time. He got them snacks, wine, and has the fire pit set up. Kelly pops on in with protection and CDs. She says she wants grandchildren but she would prefer a wedding first. Kelly also adds that Matt is a great catch so Brittany is in for a treat. Furthermore, she tells Matt that she wants to observe Brittany. They actually cross paths as Brittany is walking to Mat’s door and it is super awkward. Kelly reminds them that she is seventy-two steps away which is weird. Leave them alone, let them be adults.

Matt has set up roses around the home which she has to find. Of course, Kelly wants to peep and snoop but her husband planted a shrub so she cannot spy. She wants him to find a girl but that means less time for her and she is not a fan. He lets Brittany know that if Kelly makes Brittany feel uncomfortable just let him know and he will handle it. Yet, will he?

Leyna And Ethan Prep For Marriage

Ethan’s mother, Esther is in charge of everything for the wedding except for the rehearsal dinner. It falls the weekend of an Ohio State game so they want it more laid back. On the verge of tailgating but still a rehearsal dinner. The location that they landed is perfect for them and they will have around seventy-five people. It is a lot of out-of-towners since Leyna is from New York. Now Esther is taking over and she wants a food truck and has ideas for the decor. This is all too much for Leyna since it is her day. Ethan has to remind himself that it is Leyna’s wedding, not Esther’s then he wraps his arms around her and calls her a MILF. It makes his fiancee so uncomfortable.

She jokes that she is in a throuple but Esther says there should be no jealousy because she is his mother. Leyna is now talking to a friend about Esther being in control of everything. She notes that she is more boho whereas Esther is glamorous and nothing is in her control. At this point, Esther has 80 people which is more than Leyna so it’s a lot but she is paying for it. Her friend reminds her that she has to say something because this is her day and she only gets it once. Time for some boundaries.

The morning after Brittany slept over, Kelly tells her husband she wants the shrub he planted gone. It interferes with her viewing and wants to call someone to have it removed. He tells her she will have to call to have it taken down. However, he thinks that Matt needs privacy so to leave it be. Matt wakes up and says they had fun but then he goes outside and his mother is on an ATV, driving past his house. He cannot understand what she is doing.

Brittany comes outside in her robe as Kelly says the tree is going down. She’s actually ripping it out herself and Brittany cannot believe she is waking up to this. Kelly looks at Brittany and says she is “bats**t crazy.” Yes, that is now officially clear.

Next time, Esther reveals she will be in Miami at the same time as Leyna. Emily and Yussra confront one another while Lorenda interrupts a date between Tre and Abbey. Finally, it is on between Kristy and Nancy but Robert will probably just sit there in silence. Watch I Love A Mama’s Boy Sundays on TLC.