It seems the drama on-screen has continued off-screen too. It was reported The Bachelor: Women Tell All was filmed this past week in Los Angeles. Of course, some of the most talked-about contestants were there including villain Shanae Ankney. Genevieve Parisi was also in attendance. A group of the contestants from Clayton Echard’s season got together to celebrate a few of the women’s birthdays. They are now getting some backlash after they were seen partying with a sign that said f*ck Shanae. Keep reading to find out more and also Genevieve’s response to it all.

US Weekly shared what went down while a group of women celebrated birthdays for Elizabeth Corrigan and Marlena Wesh. Other members at the outing included, Genevieve Parisi, Kira Mengistu, Ency Abedin, Mara Agrait, Eliza Isichei, Sierra Jackson and Jane Paik.

Of course, Shanae was not invited to their party. So, employees at West Hollywood club the Doheny Room reportedly gave the ladies a sign that read, “F–k Shanae.”

Genevieve noted, “The best part about this is we didn’t even ask for it. They just knew.”

A photo was shared on Instagram from their night out.

Fans finally saw Shanae get the boot during a two-on-one date with Clayton. It wasn’t long after that Genevieve also was sent home.

Of course, not everyone thought the sign was appropriate. So, Genevieve went to Instagram to share an apology with fans. She said, “Regarding the sign brought out at the club last night, I just want to reiterate that we didn’t ask for it and didn’t know it was coming to our table.” She continued, “That being said, it was insensitive for me to video it and post it to Instagram. Nobody is perfect and I’m learning as I go. 🤍”

Reality Steve also chimed in and backed Genevieve up. He basically said that after hearing some of the things Shanae said at the Women Tell All taping it was fair game for Genevieve and the other ladies to feel the way they did. Genevieve shared his post and thanked him. 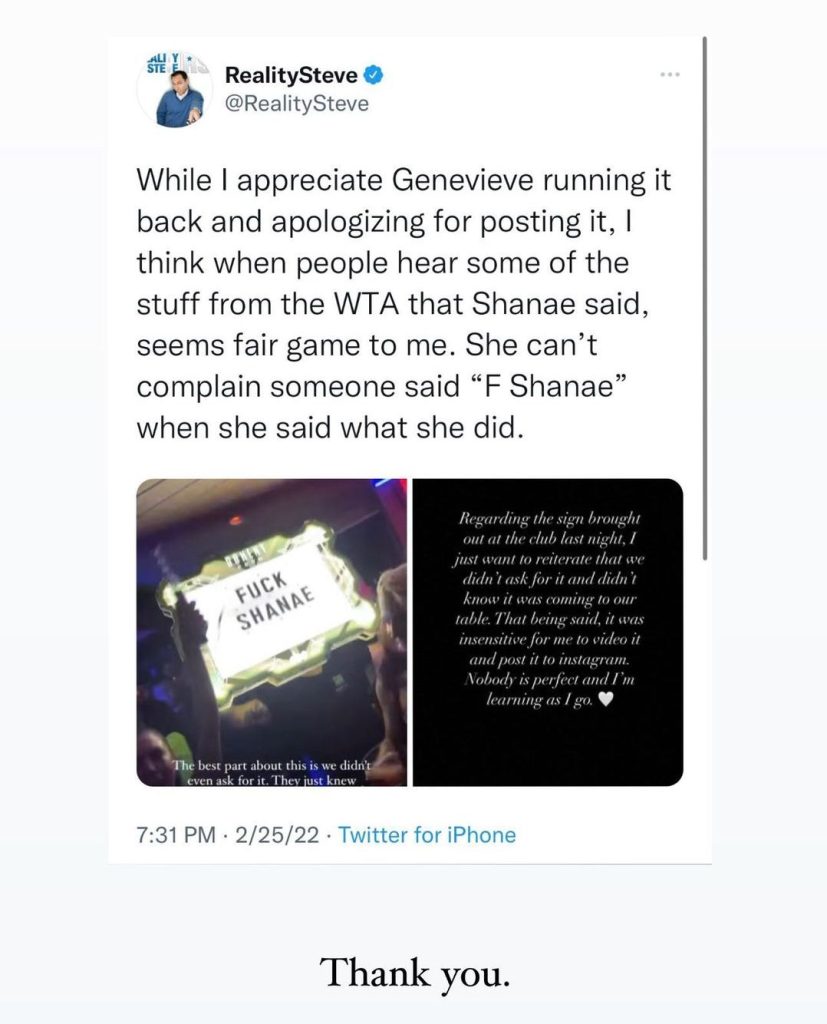 Shanae caused drama between many of the ladies on Clayton’s season. One of the biggest issues she faced was insulting Elizabeth Corrigan for having ADHD.

Clayton claims if he had known the extent of the bullying that was taking place when he wasn’t around he would have sent her home much sooner.