Jana Duggar has officially spoken. The former 19 Kids & Counting and Counting On star is responding to the rumors that she was arrested for child endangerment. Now, she reveals whether these were just rumors or if they are the truth.

Katie Joy of Without a Crystal Ball first broke the news that Jana was facing an endangerment of a minor charge. At the time, very few details were public. A child that was in Jana’s care was found in the street near the Duggar family’s home. It’s rumored that Jana was sleeping and the little one snuck out the door and made it down the road.

Later, one of Katie’s sources revealed more details, including which child was involved. The source claims that it was 22-month-old Maryella who was found in the road. Fortunately, she was found safely. This all happened back in September, but the news only got out in December, right around the time of Josh Duggar’s guilty verdict.

Since Jana’s legal troubles were leaked, a couple of her brothers and her sister, Jessa Seewald, have spoken out. Now, Jana wants to set the record straight herself.

In a new Instagram story post on Tuesday morning, Jana shared an explanation of what actually happened. She decided to share the true story “because the media has been having a field day with it all.” She continues, “I prefer a more private life, but I know my last name means that everything we do is open to public criticism and interest, especially during this time.”

“The raw facts: I was babysitting a few months ago when one of the children wandered outside alone. A passerby who saw the child called the police. This resulted in a written citation, as well as a follow-up with child welfare who concluded that it was an accident and the child was unharmed. They recognized it was a case of a child slipping out of the house when you turn your back for a moment. It all happened so quickly and was scary.”

She then added, “I am grateful for law enforcement and those who protect and serve our community. I was certainly never arrested like some may have implied. In the end I was just upset at myself that it had happened at all, but so thankful it all ended safely and that’s truly what mattered the most to me.” 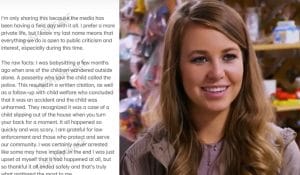 So, what do you think of Jana Duggar’s statement about her child endangerment charge? Do you appreciate the “raw facts” she shared? Share your thoughts in the comments section below. For more news about the Duggar family, come back to TV Shows Ace.