Amy King previously put Jana Duggar’s misdemeanor on blast on social media, but now, she’s backtracking. The news broke this week that Jana was charged with a misdemeanor back in September. She was charged with endangering a minor, pleaded not guilty, and will go to court in January. At this point, the details are still unconfirmed.

However, Katie Joy of Without a Crystal Ball spoke with a source who says Jana allegedly fell asleep while watching the kids at her parents’ home. A child was found in the street outside of the house. Later, Katie revealed that the child involved is Josh and Anna Duggar’s daughter, Maryella, who was 22 months old at the time.

So far, the Duggar family hasn’t said anything about this. But one relative finally broke the silence on Saturday.

Jana Duggar’s misdemeanor is mentioned by her cousin.

In an Instagram story on Saturday morning, Amy shared a snap of her two-year-old son, Daxton, sitting in the living room while he watched a movie on TV. She wrote, “One thing I won’t be doing is falling asleep.” Based on the timing of her post, it’s pretty obvious that she’s putting her cousin Jana on blast over her child endangerment charge. 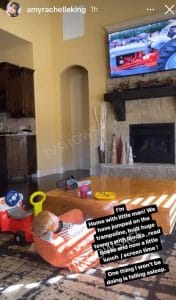 Amy King deletes her original post and empathizes with her cousin.

Then, she adds, “I bet you were exhausted, stressed, and just emotionally worn out. Watching multiple kids is hard! Bc there’s so many of them and you only have two eyes!! It’s a very sad situation going on and my heart goes out to @JanaMDuggar love you.”

It’s unclear what exactly prompted this follow-up post. It’s possible that Amy took the heat online or that one of the Duggar family members contacted her. But something made her change her tune and have some empathy for Jana in this situation.

So, do you appreciate the fact that Amy King deleted her original post about Jana Duggar’s misdemeanor? What do you think of her follow-up post? Share your thoughts in the comments section below. For more news about the Duggar family, come back to TV Shows Ace.