Is Jim Bob Duggar STILL running for Arkansas State Senate after his son Josh was found guilty? The Duggar patriarch first announced his run at the end of October, just a month before Josh’s trial began. He continued campaigning throughout the trial, sharing regular updates on his campaign pages on social media.

After he made this announcement, he was slammed by fans and critics due to the timing of it all. Even his son-in-law Derick Dillard questioned this decision. In the spring, Josh was arrested for receiving and possessing child pornography. Because of this, the Duggars have received a lot of negative attention online due to their association with Josh.

Josh’s trial wrapped up this week and he was convicted on Thursday, December 9. He’s facing decades behind bars and hundreds of thousands of dollars in fines. Now that Josh has been convicted in his child pornography case, where does Jim Bob stand? 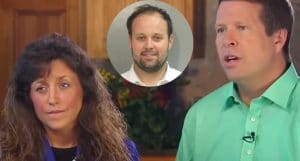 In a tweet on Thursday, Jim Bob confirmed that he’s still campaigning. He revealed that he has completed a candidate survey and shared that his “vision and goals” will be on his Ballotpedia profile for everyone to see soon.

The confirmation that he’s still running for State Senate comes as a shock to fans and critics of the family. It was a surprise that he announced his campaign when he did. But after Josh was convicted on Thursday, many fans and critics assumed Jim Bob would drop out of the race.

In the replies to Jim Bob’s recent tweet, he is being put on blast. One Twitter user writes, “How are you going to protect AR families when you cannot even protect your own? Get help for your pathological need for attention. It isn’t good for you, your family or Arkansas.”

Another adds, “Read the room, Jim Bob. No one wants your vision after we see how your ‘leadership’ worked out for your own family.”

Other Twitter users think that Jim Bob is “arrogant” and that’s why he hasn’t dropped out yet. Many agree that he needs to focus on his own family rather than a political campaign.

I took the time to complete @Ballotpedia's candidate survey to share my vision and goals. You'll be able to see the responses on my profile shortly.

So, does it shock you that Jim Bob Duggar is still campaigning after his son Josh was found guilty? Do you think his run will be successful? Share your thoughts in the comments section below. For more news about the Duggar family, come back to TV Shows Ace.