Josh and Anna Duggar began the former’s child pornography trial striding into the courthouse with big smiles on their faces.

After one week of the proceedings, their moods appear to have shifted. In fact, the pair looked miserable as they left the courthouse on Friday.

In pics snapped by The Sun, Josh and Anna Duggar, appeared somber as they left the John Paul Hammerschmidt Federal Building, in Fayetteville, Arkansas.

The couple both donned black face masks as they walked hand in hand. Josh wore a suit and blue tie, while Anna sported a gray dress and black jacket as they exited the building surrounded by a crowd of lawyers. 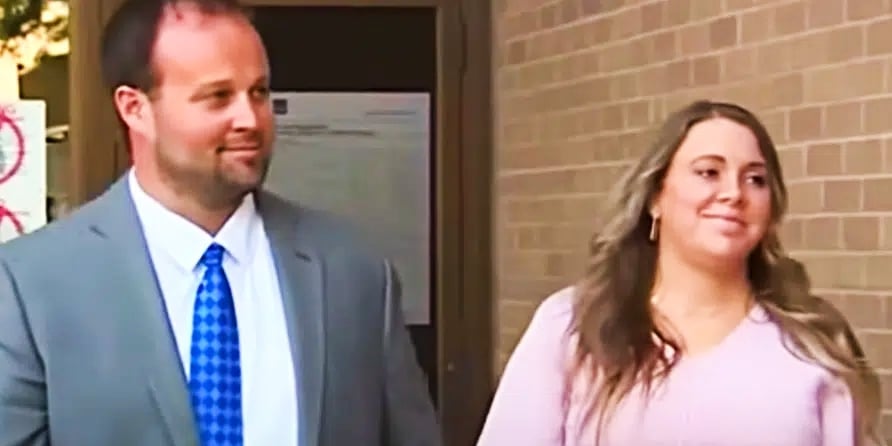 They both kept their heads down as they made their way from the courthouse to a waiting car.

While it’s not entirely clear why the couple’s mood may have changed from the beginning of the trial, there were plenty of reasons presented by the prosecution.

In particular, the reality star‘s phone was front and center in Friday’s trial, as incriminating text messages were presented as evidence in the case.

At the top of the list of evidence that appeared to have been text messages uncovered in the ongoing court case. Those texts showed that Josh left his car dealership for a trip to Lowes hardware store around 8:14 pm on May 14, 2019, despite a mass of illegal files being downloaded to his work computer.

The juxtaposition between what the Counting On stars were doing while files were allegedly downloading seemed to shock many.

The couple headed to the store to shop for “doors,” as a photo was snapped of the young mom looking through options. Another photo showed the couple smiling together as they shopped for new doors.

While going through various dates in court, alleged texts from a phone, as well as photos allegedly taken on the device, were shown to take place at the same time that child pornography content was supposedly being downloaded elsewhere. The alleged texts discussed cars and some included photos from the car lot.

All of this apparently took a toll on Josh and Anna Duggar whose mood seemed quite a bit darker later in the week.

While it appears there is still quite a ways to go before the trial is over, experts are saying things are not going particularly well. That could be one reason why the smiles faded away as the evidence against mounted.

It should be pointed out that smiling heading into a trial like this might not have been the best idea anyway. However, that’s a bit of a moot point as Josh and Anna Duggar’s smiles are gone for now as they wait for the second week to begin.