Anna Duggar has been trying to lay low ahead of her husband Josh’s upcoming trial. She’s been silent on social media, with the exception of announcing her seventh baby’s birth. She also hasn’t issued a statement on her husband’s arrest while many other family members have.

Now, just days ahead of Josh’s trial, Anna has surfaced again. And from the photos, it looks like she’s living her life normally and is all smiles. Meanwhile, her husband will go to trial on Tuesday, November 30. The eldest Duggar son was arrested in April for receiving and possessing child sexual abuse material (or child pornography). 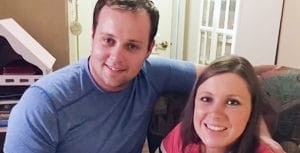 As we reported, Anna’s brother married Josh’s custodians’ daughter last weekend. Just months after beginning their relationship, David Keller and Hannah Reber are husband and wife. Because the Rebers live in Arkansas, the wedding was held there and some of the Duggars were in attendance. After the wedding, it looks like some of the Kellers, Anna’s family, stuck around in Arkansas.

Anna’s sister, Susanna Keller, posted a few photos on social media. Anna and some of her children are in the photos. However, Susanna’s Instagram account is private. Katie Joy of Without a Crystal Ball shared some of the photos posted by Susanna.

In a new post, Katie wrote, “The photos are from their brother’s wedding. I have mixed feelings seeing her smiling & acting care free. Josh was also at the wedding.”

In the photos below, Anna is smiling as she poses with her sister. Katie points out that she thinks it’s “repulsive” that Anna would be so happy at a time like this. After all, Josh’s trial begins on Tuesday, November 30.

In the comments section of Katie’s post, Duggar fans and critics are weighing in on the new photos of Anna. Some think she looks like she could have been crying, while others think she looks “dead inside.” However, plenty more think it’s odd that she looks normal and cheerful. A few Instagram users think she could be forcing a smile. We’ll have to wait and see what happens with Josh’s trial and how Anna’s life could be affected.

So, are you surprised to see Anna Duggar looking so carefree just days before Josh’s trial? What do you predict will unfold over the next few days? Let us know your thoughts in the comments section below. For the latest Duggar family news, come back to TV Shows Ace.

‘1000-Lb. Sisters’: Amanda Gives Tammy Slaton A ‘Dose Of Real’ And Fans Are Here For It
Hilary Duff Stars In ‘How I Met Your Father’: When Do First Episodes Drop?
Courtney Waldrop Worried Sick Over Missing Child
Production Spent Tons On ‘Bringing Up Bates’ Before Pulling The Plug
Queen What? ‘1000-Lb. Sisters’ Fans Give Tammy New Nickname