Tammy Slaton of 1000-Lb. Sisters has been hospitalized. The TLC personality uploaded a video to TikTok with an update on her health and weight loss journey. She explained that things have been pretty rough for her for a while now. So, rough that she landed in the hospital with carbon dioxide poisoning.

Her video update reveals that after being hospitalized she learned she was septic. She was placed on life support. And, they had to perform a tracheotomy on her. How is Tammy Slaton doing and is she getting out of the hospital any time soon?

The 1000-Lb. Sisters star tells her fans that from the months of July to August she was not herself. She reveals that she had a bit of a mental breakdown and really struggled with life. Things got so bad for Tammy that they had to take a break from filming Season 3 of 1000-Lb. Sisters in September. She explained that they resumed filming and wrapped up filming in October. Tammy added that they are no longer filming because Season 3 is currently airing on television.

According to the TLC personality, she was hospitalized for carbon dioxide poisoning. Chatter on Reddit discussed whether she meant dioxide or monoxide. Being that she is morbidly obese, respiratory therapists chimed in to argue that dioxide made more sense.

Turns out, Tammy likely suffered from a condition called obesity hypoventilation syndrome (OHS). On Reddit, respiratory therapists explained that when someone is overweight they often don’t take deep enough breaths to clear the carbon dioxide (CO2) from their lungs. This, in turn, results in carbon dioxide poisoning.

No longer septic, Tammy Slaton is adjusting to having a trach in her throat. She explains that she is heading to a nursing rehab when she gets out of the hospital in a few days. Tammy Slaton explains she’s going to rehab so she can work on losing weight and building up her strength following her stay at the hospital.

1000-Lb. Sisters fans hope this hospitalization is the wake-up call Tammy Slaton needs to turn her life around and finally start dropping pounds. 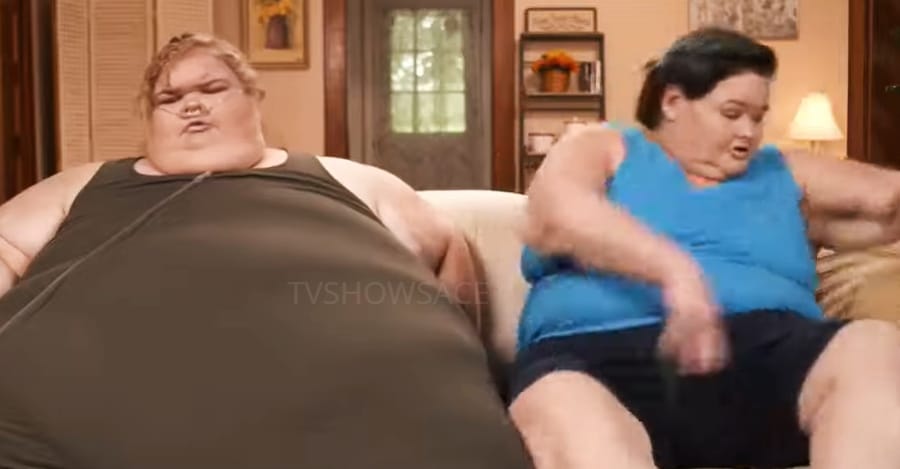 It was a disturbing video and still leaves fans wondering is Tammy going to be ok? It will be interesting to see how TLC deals with this major leak in the new season.

Come back to Tvshowsace for more Tammy Slaton updates.

‘LPBW’ Josiah Roloff Way Ahead Of His Age, See Latest Feat
Moriah Plath Asks Fans For Grace With Family During Difficult Time
Matt & Amy Roloff Plus Trent Johnston All In One Place, Why?
Katie Thurston Teases Hint Of Cleavage In Lavender Tank Top
Meri Brown’s Child Identifies As Genderqueer: What Does It Mean?