How many Roloff grandchildren are there as of 2021? Little People, Big World fans can’t always keep track of Matt and Amy’s grandkids. If you’d like an update on how the Roloff family has grown, keep reading.

It’s a busy time for the Roloffs with new little ones on the way. The kids are certainly growing up quickly, and Matt and Amy enjoy every second they get to spend with the grandkids. 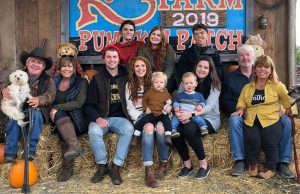 Which family members are currently expecting?

Tori and Zach Roloff excitedly announced this week that they are expecting their third child. The baby is due in the spring. The couple isn’t planning on finding out the baby’s gender prior to the birth. Before getting pregnant this time, Tori had a miscarriage. Because this baby will be born after a loss, they may refer to the baby as a “rainbow baby.”

Jacob and Isabel Roloff are expecting their first baby, a son, who’s due to arrive in December. Last week, Isabel reported that she was in labor, but the couple hasn’t revealed whether the baby has arrived. While she was pregnant, they shared that they wouldn’t be posting pictures of the baby’s face, so it’s possible that they won’t make an announcement at all. Or maybe they are waiting to share the news.

Matt and Amy have a total of five grandchildren as of 2021 with two more on the way.

Jackson Kyle is Matt and Amy’s first grandchild, and he was born on May 12, 2017. The now four-year-old boy is Tori and Zach’s first child.

Then, Ember Jean, Audrey and Jeremy’s first daughter, joined the family. She was born on September 10, 2017, so she’s four years old, just like Jackson.

Bode James, Audrey and Jeremy’s second child, arrived on January 8, 2020. He will celebrate his second birthday shortly after the new year begins.

The newest member of the Roloff family, Radley Knight, was born on November 8, 2021. He’s Jeremy and Audrey’s third baby.

So, did you know how many Roloff grandchildren there were as of 2021? How many more do you think there will be in the next couple of years? Let us know in the comments section below.