Former TLC star Jim Bob Duggar might have just made a huge mistake. Though the family has had a large platform for years, from their TV shows to social media, they don’t appear to be prepared for everything. Read on to see what Jim Bob was involved with this time and what fans have to say about it. 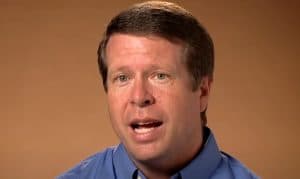 In a new Instagram post on Tuesday, the Duggar family shared a photo of their son Jackson with a buck he had just killed. In the photo, the 17-year-old is kneeling beside the deceased animal. He’s hanging onto the antlers while smiling at the camera.

“Jackson got a nice buck on Saturday, the opening day of gun season here in Arkansas! We’ve already enjoyed some of the meat from his harvest! Deer jerky is one of our favorites to make. Jackson is a good shot, and becoming a great cook, too! 👨‍🍳”

Counting On Fans Call Out Family For Huge Mistake

In the comments section of the post, fans are sharing how they feel about the new post from the Duggar family. While there is a variety of comments on the post, most of them are negative. Fans are saying that it’s gross or that it’s not very pro-life of the family to go hunting.

Others think this photo is a bad decision based on the family’s current events. The Duggars are already being blasted for Josh’s arrest, which happened in April, as well as his upcoming trial, which is set for November 30.

One Instagram user encourages the family to take some time off social media and “feel the room.” Another points out that there is no way the Duggars have a PR team if they are posting these kinds of things online.

At this point, the Duggar family hasn’t responded to any of these comments, and it doesn’t seem likely that they will. Though they sometimes post controversial content online, they don’t always seem to be interested in conversing about it with fans and critics. So, many of the comments, if not all of them, on the post will go unanswered.

There’s no way to know for sure whether the Duggars have a PR team, but it doesn’t seem likely based on this controversial post.

Do you think that Jim Bob and Michelle Duggar should be more careful on social media right now? Let us know your thoughts in the comments section below.

For the latest updates about the Duggars, come back to TV Shows Ace.