Rumors are flying that there may be some sparks happening between former Bachelorette Katie Thurston and one of her suitors. A former Bachelorette contestant is rumored to have sent flowers to Katie in the past few days. The rumors follow Katie’s breakup with Blake Moynes. What is going on and who are these flowers allegedly from?

Heavy shared the rumors that are flying around the internet about Katie Thurston and a former contestant. Who is it and what is going on?

First of all, the post Katie shared on Instagram featured the song “Sparks” by Coldplay. She made the post to her Instagram Stories on November 4. There are some fans who believe she did this on purpose to get people talking. The flowers were accompanied by a note that read, “These are not romantic flowers. These are happy flowers. Because I do not want you to be… I want you to be happy.”

Many believe that these flowers were sent from John Hersey. Reddit users went crazy over the note that intentionally blocked the sender’s name out. There were reportedly over 150 comments on the Reddit thread and many are intrigued to know if it was indeed John who sent them.

Some were even trying to analyze the handwriting to determine if it was Johns. Of course, a florist could have also written the note if they were ordered over the phone or internet.

Rumors have been flying that Katie is dating John. Many are even speculating they were dating before Katie and Blake Moynes parted ways. Katie and John both live in San Diego. Plus, they have spent tons of time together before Katie and Blake’s split and after. He seems to be helping her through her heartbreak.

One of the comments on Reddit said, “How long until the announcement that Katie and John are together?? They must be going public soon.”

Another said, “Lol I don’t think we even need to see the intentionally hidden name to know…it’s John.” 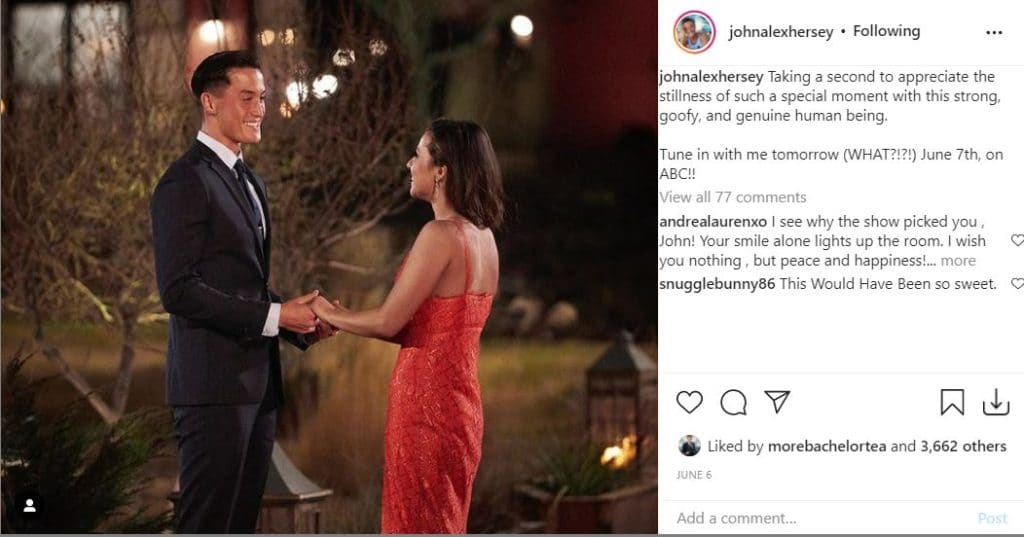 There are a huge majority of people who think the flowers were from John. However, there are just as many more who believe Blake sent the flowers.

One Reddit user said, “I tbh wouldn’t be shocked if it’s Blake if that’s the case. I feel for them I always say that in these posts because they didn’t break up for a lack of love.”

Another said, “I lean towards saying they’re from Blake. Given they’re broken up I feel like this is what he would need to imply.”

Many fans wish these two would work through their differences and get back together.

So, the question remains, is John moving out of the friend zone or is Blake trying to cheer her up and possibly win her back?

What do you think?