Josiah and Lauren Duggar are continuing to clean up their social media pages ahead of Josh’s trial in his child pornography case. Now, they have taken things one step further and completely erased their daughter Bella from their page. So, what exactly is going on here?

As we reported, Josiah and Lauren recently deleted many photos of their daughter, Bella, from their Instagram page. Fans and critics think they could be doing this due to Josh’s trial, which is set for November 30.

Not only did Josiah and Lauren delete their photos of Bella, but they also haven’t posted any new ones in a year. For a little while, they were sharing regular updates on social media and giving fans a peek into their lives. But, last November, that all came to an end.  They have popped up on the Duggar family’s page here and there. However, for the most part, they have essentially disappeared from social media. 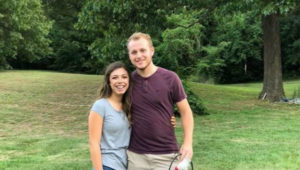 On Reddit, a Duggar Snark noticed that the couple has deleted every single picture of their daughter on social media. The first screenshot shows Josiah and Lauren’s page on October 26. The second photo is of their page on November 5. Noticeably, a couple of photos are missing. Specifically, Josiah and Lauren deleted the ones that feature their daughter.

On Reddit, one user writes, “I think when Lauren married into this family. She didn’t realize how much of her life would be on display. She didn’t like it.”

Another user applauds their bravery, writing, “Good for them. Protecting kids is all new to these two, there is no family precedent.”

Someone else chimes in, “They were so young when they got married that they probably didn’t think about doing anything differently. Now that they’re a bit older and have gone through some crazy experiences they’re wising up a bit.”

Some family critics also wonder if Josh’s latest scandal opened Josiah and Lauren’s eyes and made them realize just how many people could be seeing photos of their daughter online.

So, do you think that Josh’s investigation and arrest prompted Josiah and Lauren Duggar to scrub their social media? Or do you think they simply reevaluated their decision to share their lives so publicly? Let us know in the comments section below.

For more news about the Duggar family, come back to TV Shows Ace.