Jed Wyatt is once again talking about his infamous breakup with ex-fiance Hannah Brown. The former Bachelorette chose to give her final rose and heart to Jed. However, she later learned he actually allegedly had a girlfriend before coming on the show. Now, he’s sharing some more details about what went down and how production played a role in it all.

Jed Wyatt speaks out about Hannah Brown split on camera

US Weekly shared what Jed Wyatt had to say this week about his Hannah Brown split. Jed appeared on Reality Life With Kate Casey where he talked about that split that left Bachelor Nation reeling. Jed said if he had it his way, the conversations with Hannah about Haley Stevens would have come privately. What else did he say?

Jed said at first he thought the entire thing was a bit comical. Then, he let himself get caught up in the reactions and negativity that was being inflicted on him. He said, “These people don’t know me. And then I got into the habit of reading some of the things that people were saying. And then got in the habit of feeling like I needed to respond, which I did, [but] I don’t owe anything to anyone. The only [person] that I needed to talk to at the time was Hannah. … no one else needed to know anything.”

Jed said production insisted he hash things out with Hannah Brown on camera. He said, “The show absolutely insisted that, you know, I hash it out with [Hannah] in person and this and that, and give it to the public so that they can come at me and totally just roast me.” 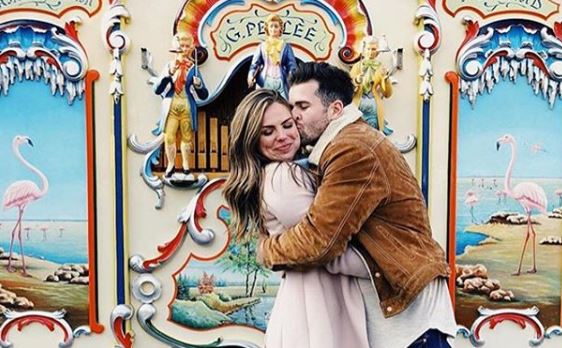 Jed also said that in the beginning he did think it was funny how everyone was reacting. Then fans got harsh. Many sent him messages telling him he should kill himself, etc. He went on to say everything ended up causing a deep hurt and one that not many can relate to.

He was glad to have the support of his family through it all. Jed said he turned to drinking and partying. While he admits he should have pursued therapy, he didn’t go that route. He tried meditation and journaling and still nothing helped elevate what he was going through. Then, he met his girlfriend Ellen Decker. She changed his world.

Jed said everything happens for a reason and while it was all horrible, he wouldn’t be where he is today without going through what he did.

He also pointed out that he doesn’t blame Hannah for anything. He said, “Hannah and I had similar southern upbringings. And that was something different than anyone else on the show. … I guess [she] and I just [had] that kind of connection, and it felt comfortable.” He continued, “But on top of that, you know, when you have a lot of people in your ear … I can see that I was definitely pushed in that direction, I’m sure she was too. And it’s like, really hard to, like, listen to your gut.”

Both Hannah and Jed have moved on and are happy in their current relationships. What do you think about Jed saying production pushed for their on-camera breakup?