Netflix dropped first-look stills of Julia Garner as the Scamming Queen, Anna Delvy and people can’t get over it. The upcoming limited series Inventing Anna, based on the life of Anna Delvy, will premiere in 2022.

What Is Inventing Anna?

It follows a journalist named Vivian Kent (played by Anna Chlumsky), who is investing the case of an extremely popular fraudster Anna Delvey (played by Julia Garner). This series is set during the time when Anna Delvey, popular Instagrammer and German heiress turned con woman, is facing deportation to Germany. 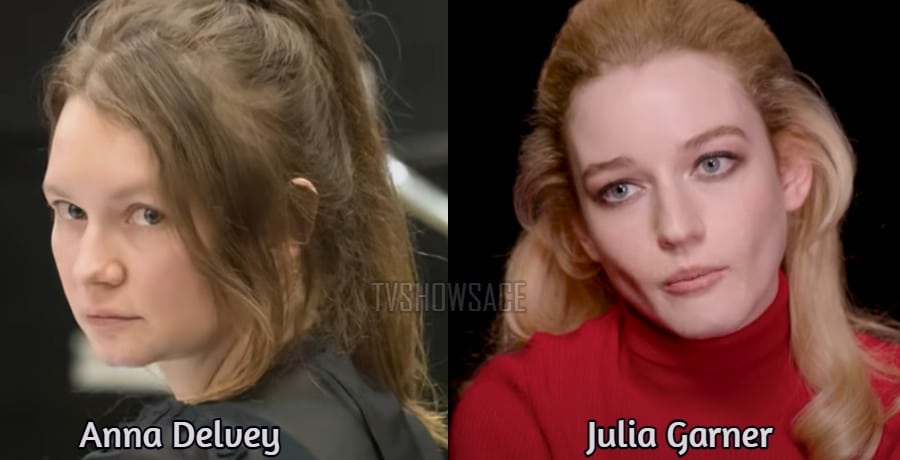 As Vivian proceeds with the case further, she starts asking deeper questions and begins to wonder whether Anna is just a woman who stole New York’s money or she is something more than that. While her visits with Anna in jail, she forms a love-hate bond with her. Racing against time, Vivian fights to find answers to some deeper and bigger questions.

This series shows Anna through various stages in her life, from being rich, wearing designer clothes, drinking expensive wines, and enjoying life to sitting in jail, waiting for her trial. This dark and funny tale will take viewers through the highest as well as lowest points of Anna Delvey’s life, and also explore her relationship with Vivian Kent.

Two of the four photos revealed by Netflix shows Anna at the peak of her life, traveling in cruises and living a luxurious life, while the other two photo shows her in custody, which looks like a shelved “Orange is the new Black” plot. Either way, people can’t get enough of these photos.

This story is completely true…except for all of the parts that aren't. Julia Garner is Anna Delvey in Inventing Anna, from Shondaland. pic.twitter.com/q6zsfqiDaw

Julia Garner as a con woman and goddess of the scamming world does look like Anna Delvey in these photos, which doesn’t come as a surprise as she is also a two-time Emmy Award Winner for Ozark.

This miniseries is created by Shonda Rhimes and is based on the New York Magazine article “How Anna Delvey Tricked New York’s party people”, which is written by Jessica Pressler. Fans are excited that Shonda has something new coming out.

Jessica Pressler, the writer of the original article is also the producer of the show. Executive producers include Shonda Rhimes, Betsy Beers, Verica, and David Frankel. Don’t miss Inventing Anna when it comes to Netflix in 2022.