7 Little Johnstons fans often wonder what it is like for someone like Emma Johnston to go to school. Do her teachers and peers recognize her? Do they watch her on TV? Does she talk about being on TV while she’s at school? Is she recognized everywhere she goes?

Fans of reality TV assume it must be difficult to try to live a normal life and do mundane everyday tasks while being in the spotlight. Some, however, don’t take pity on reality TV stars because they insist it is a life they opted for when they agreed to be on TV. This does bode the question of whether reality TV stars give up their right to privacy when they agree to be on television.

Emma Johnston hosts a Q&A session with her followers

Emma Johnston went on a mysterious road trip this weekend. She confirmed the road trip had nothing to do with the show as they were already done filming. She also admitted some of her favorite episodes from the show were when they were filming while traveling.

Several of her followers asked where she was going or why she was traveling. Unfortunately, Emma Johnston was a little dodgy on the details. She insisted she wasn’t able to tell why they were traveling.

7 Little Johnstons fans, however, now believe the family traveled to pick up a foreign exchange student that is now living with them. Emma and her mother Amber revealed the young man was from Finland and he would be staying with them for a while.

One of the other questions her followers asked was regarding school. Fans wondered if her peers and teachers watched her TV show.

Emma Johnston admitted that she has absolutely no idea if her teachers or friends in school watch her TV show. She explained that she didn’t really go around school flaunting the fact that she was on TV. Turns out, that wasn’t really something she openly shared with the people around her.

Emma Johnston explained that she goes to school to “get educated.” She isn’t interested in flaunting her fame. See her response to the question in the screenshot down below. 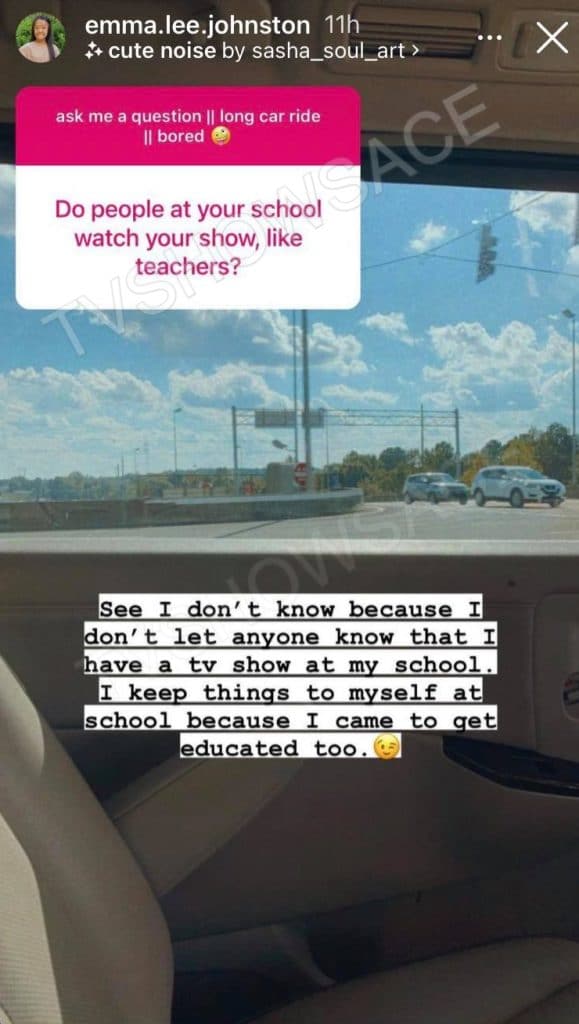 Are you surprised Emma Johnston doesn’t get recognized at school? Share your thoughts with us in the comments down below.

Fans can watch old episodes of the TLC series on Discovery+. The 7 Little Johnstons Season 10 Premiere Date is on Tuesday, November 16 at 9 p.m. ET/PT.