7 Little Johnstons fans are wondering if Emma Johnston has a boyfriend. Fans know Emma just celebrated her sweet sixteen birthday. And, fans know news recently broke that Emma Johnston is a sixteen-year-old millionaire. So, there is no denying this sixteen-year-old millionaire would be a catch. She’s going to have no trouble moving out of her parents’ home when she turns 18.

The young TLC star is on the road this weekend

As we previously reported, Emma Johnston is on the road this weekend. She took to her Instagram Stories to invite her followers to a Q&A session. Emma explained that she wasn’t able to share where she was traveling to or why. The young TLC star actually explained this a few times as she had a couple of different followers ask for the details on where they were traveling to.

Does Emma Johnston have a boyfriend?

Once fans realized she wasn’t going to spill where she was traveling to this weekend on her long road trip, they moved on to other questions. One big one involved Emma’s dating life. The significant others of her siblings have always been featured off and on in the 7 Little Johnstons. As Emma gets older, fans wonder if she has taken an interest in boys yet. One fan just boldly asked the young lady if she has a boyfriend.

Emma Johnston responded to the question with a somewhat grossed-out expression on her face as she shook her head “no” over and over again. Emma almost looked a little offended by the question. She also wrote the word “nope” tons of times in response to the question in case her disgusted face and her shaking her head “no” wasn’t enough.

So, fans now know she doesn’t have a boyfriend. And, it doesn’t sound like she’s too interested in getting one in the near future. 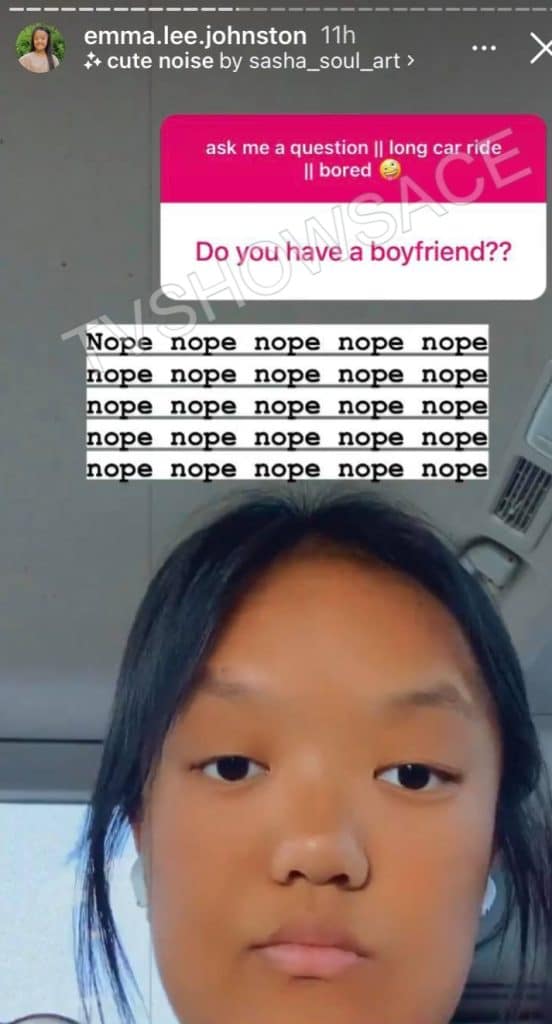 Are you surprised Emma Johnston doesn’t have a boyfriend? Or, do you understand why she doesn’t want to focus on boys right now? Do you think it is hard for a reality TV teenager to have a boyfriend? Share your thoughts with us in the comments. And, keep coming back for more on the Johnstons family.

The 7 Little Johnstons Season 10 Premiere Date is on Tuesday, November 16 at 9 p.m. ET/PT.