Former Bachelorette Becca Kufrin had big contract demands before agreeing to appear on Bachelor in Paradise. This would be Becca’s third appearance on the franchise. Plus, she was going to Paradise as a former lead which was a first as well. So, what did Becca demand in her contract? Keep reading to find out more.

Becca admits going to the beach wasn’t on her radar. She almost thought they were joking. Becca said they kept asking her over a course of a few weeks. She kept saying no and kind of laughing it off. So, when two of her best friends who weren’t supposed to be working on this season ended up going they convinced her to go.

US Weekly shared what Becca had to say about agreeing to go on the show. Becca said, “It wasn’t on my radar. They have asked me for probably a couple of weeks, and I kept saying no and at first, I thought it was a joke.” She continued, “I was like, ‘Haha, that’s funny.’ It kind of transpired because two of my best friends, who work on the show, who also weren’t supposed to be working on the season, ended up getting roped in and they were like, ‘Will you just come? It’ll be fun.’ and I’m like, ‘Look, if I’m gonna go, I have a lot of demands here.’”

Becca went on to share her demands. She said, “And I basically was like, here’s the list of everything I want — Minno on the beach, like, the most random extreme things. I want daily shrimp tacos, whatever I can get.’ I’m gonna, like, try to finagle a pretty decent contract here. … I asked for a trip back to Thailand, I think, that obviously was not accepted. But yeah, I think it was probably two days before — two or three days — before I actually went down there that I signed everything.” 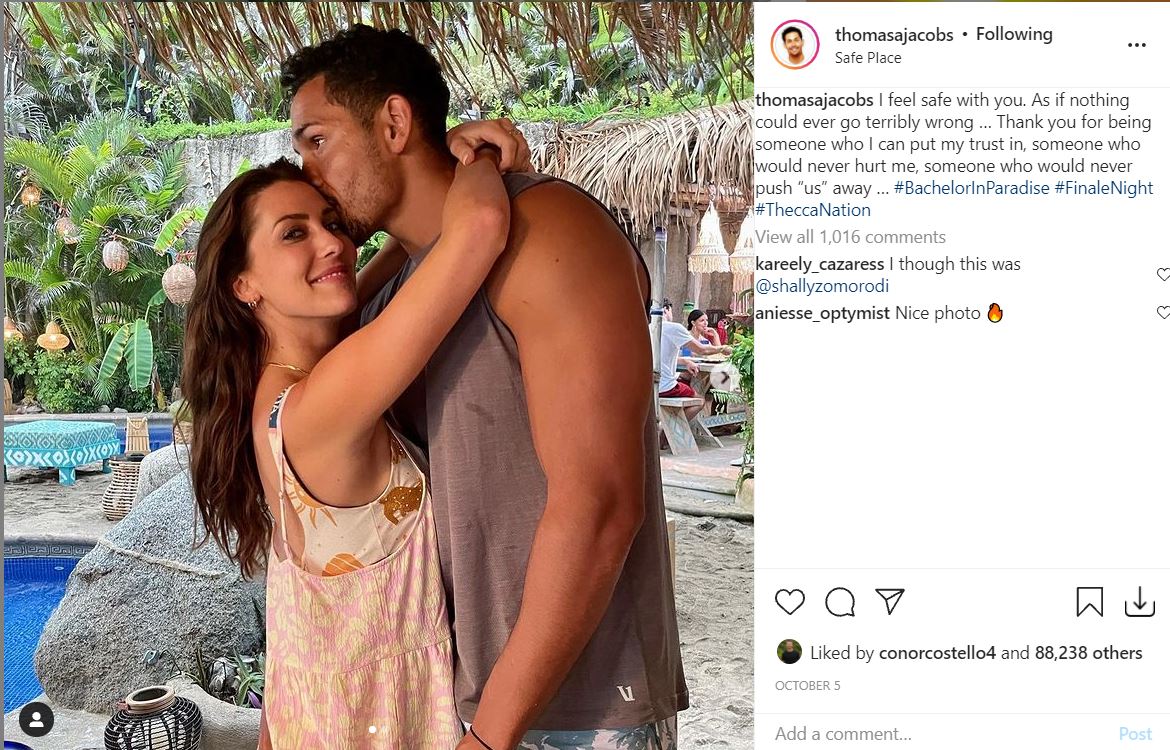 Everything worked out and she’s in love

Becca going on the show may have found her the one. She fell for Thomas Jacobs. The two broke up on the show. However, Becca reached out post filming and wanted to get back together. The two are in love and enjoying their time together.

The couple has even already been talking about engagement rings. Becca admits to calling her mom and telling her that she really thinks she wants to marry him.

What do you think about Becca’s contract demands?

Stay tuned for more updates on Becca and Thomas.