Riley Christian and Maurissa Gunn had an instant connection on Bachelor in Paradise. In fact, their first date led them to the infamous boom boom room. They were inseparable after that date. It was no surprise that Riley got down on one knee on the finale to propose to Maurissa. She of course said yes. Now, since the finale has aired the couple can be together in public and plan their future. What is in store for these two?

Extra TV caught up with Riley Christian and Maurissa Gunn the day following the finale of Bachelor in Paradise. The couple said they are so happy and madly in love. They have both been sharing photos on Instagram of their time together.

They were asked by the interviewer about future plans. Riley said they want it all. They want to live together, have a big wedding and have babies. Riley and Maurissa are planning to live in New York. Right now, Maurissa is going back and forth. However, she plans to make New York her permanent home soon. 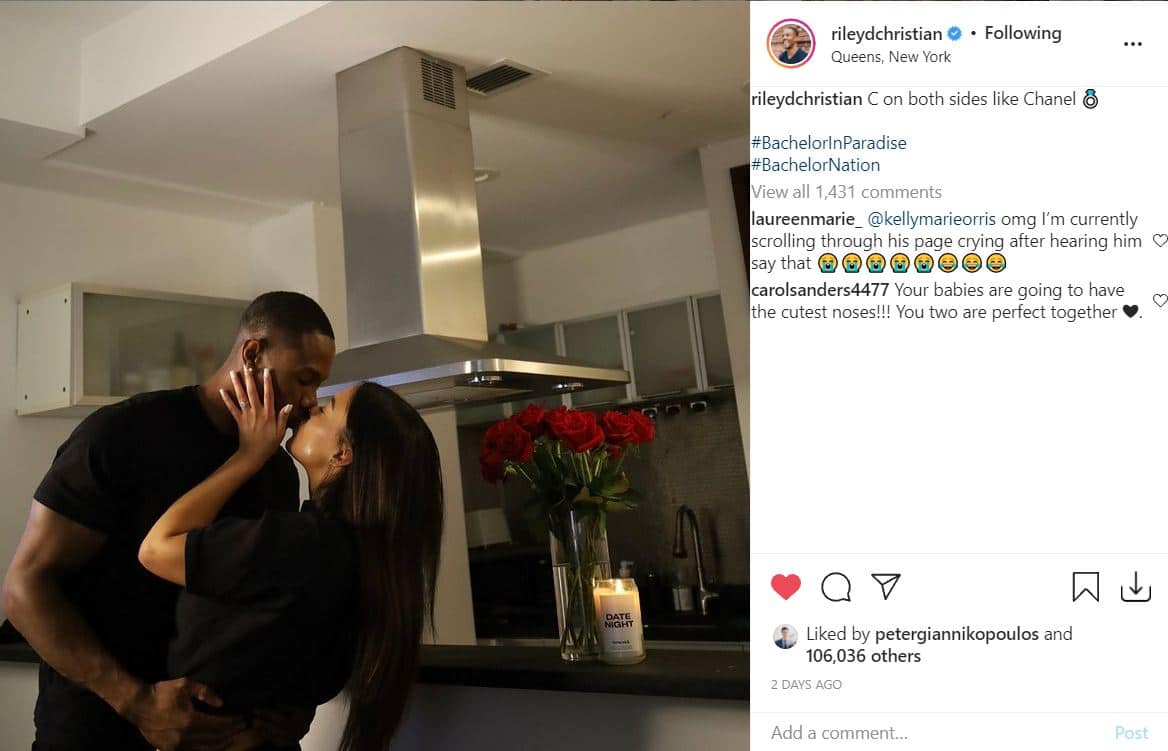 No specific date has been set for the wedding just yet. Although there is no doubt it will happen for these two.

They also were asked about babies. Maurissa said she wants a whole basketball team of kids. She then clarified and said five or six children. Riley agreed and said he wants as many as she is willing to pop out.

Riley Christian and Maurissa Gunn also made history with their engagement. They were reportedly the first black couple to get engaged on the show. People shared what Maurissa and Riley had to say about it all.

Maurissa said, “Going into this, I guess the social media and the media is kind of what let us know that we are the first Black couple to come out of this. Because we just went into it [with an] open mind. Our hearts were open and we just happened to meet each other and we look alike, which is even better!”

Riley added, “The person that we found love with also happens to look like us, which is great.” He continued, “It’s great for the culture. So, I mean, love is love.”

They both went into the process being open and ready to find love.

Now, Riley can’t wait to show Maurissa around New York City. He said he has a few surprises for her.

What do you think about this adorable couple?

Kody Brown Puts Foot In Mouth Yet Again
Is The Hottest New Anime ‘Ao Ashi’ Coming To Netflix?
‘When Calls The Heart’ Season 10 Little Jack Actor Revealed!
Savannah Chrisley Appreciates The Value Of Being Low-Key
‘Stranger Things’ Season 5 Details: What To Expect, When Will It Air