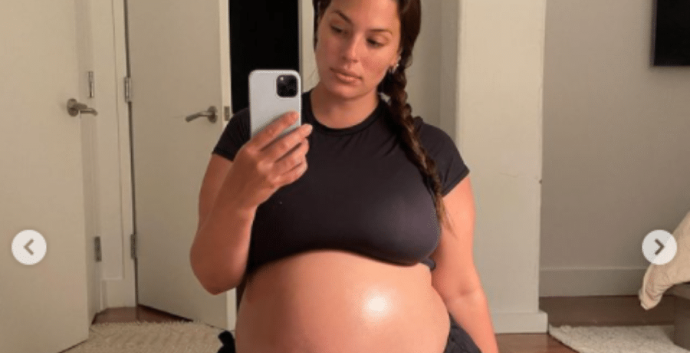 American plus-size model, Ashley Graham is expecting twins later this year, and she couldn’t be happier. The expectant mother has been documenting her pregnancy on social media, and, for the most part, has received support and well wishes from fans. Lately, however, many are turning against her, calling her content, inappropriate and disgusting. Read on to get the scoop on why Ashley’s content is angering her fans.

Ashley Graham announced just a few months ago that she is expecting twin boys with her husband, Justin Ervin. This is the couple’s second pregnancy and so far, everything appears to be going well for their family. The former Sports Illustrated cover model has been very open and candid about body changes during pregnancy. She has made an effort to document her life during this time and loves sharing it with her fans. The celeb is very vocal about body positivity and knows that a lot of people in her audience struggle with self-esteem and body issues – and pregnancy can often magnify those emotions.

Uplifting Those Struggling With Body Image

As a result of her struggles with body image, Ashley regularly tries to remind those struggling with body image that they are beautiful and worthy, inside and out. The curvaceous television host even made a video to that effect and posted shared it with her 1.4 million TikTok followers. Her short clip featured her lip-syncing Sam Smith’s “Make it to Me.” She specifically highlights the words, “by the way – you’re safe with me,” across the screen. She starts with a close-up of her looking into a mirror. She steps back to reveal herself in a basic bra and underwear, and no makeup with her belly bump out and proud. Ashley did not attempt to cover her flaws, freckles, cellulite, or pregnancy weight. Fans in the comments sung her praises for connecting with them on a real and personal level.

As an experienced model, Ashley Graham has no issues being in front of a camera. She’s got curves and she’s not afraid to show them off. During her pregnancy, the celeb has posted many scantily clad photos as well as a plethora of tastefully captured nude photos. Most of these pictures have highlighted her belly bump and changing mom-body. They can hardly be classified as provocative.

Unfortunately, not everyone is enjoying Ashley’s maternity photos on social media. The former ANTM has been getting pummeled with negative comments on her latest Instagram posts. Fans feel that her nude pregnancy photos are “disgusting” and “unnecessary.”  One fan found Ashley’s lack of clothing to be disrespectful and felt it should be saved for her husband.

Another user commented, “There are moments you need to keep to yourself. this is the moment.”

“Who just sits around nude,” asked a third.

The comments kept flowing. Commenters posted everything from vomit emojis to calling her a “slag” for posting photos of her pregnant body.

Fortunately, Ashley Graham won’t be baited into defending herself against trolls. This mama kept it classy and let her beautiful photos speak for themselves.

Stay tuned to TV Shows Ace for the latest on all your favorite television celebs.