Over the last few days, fans of the original Sabrina The Teenage Witch series have been talking about a heavily rumored official reboot. Is the millennial favorite series coming back for a reprise? Read on to find out whether Sabrina Spellman will be coming back to network television.

Oh, that’s quite a statement, huh millennials? Yep, the beloved series that held an important time slot in the Friday night television lineup of our youth just celebrated its 25th Anniversary. Originally part of ABC network’s TGIF lineup, Sabrina ran for four seasons before getting moved to the WB network for the rest of its seven-season run.

The series first aired on September 27, 1996. In honor of the show’s quarter-century birthday, leading lady, Melissa Joan Hart commemorated the day with an Instagram post. The Melissa and Joey actress reminisced about her time on the set and the wonderful relationships she created with her fellow castmates.

The actress remembered that they weren’t sure how the show would perform with audiences because it was competing in the same lineup as Clueless which aired its pilot one week prior to theirs. She thanked fans for their constant support and their love for the series that has led to now 25 years of magic.

Rumors Of A Reboot

While fans have been asking for a reboot of the ABC series for years, it never seemed to happen. Even in her commemorative post, Hart made no mention of a reboot or of reprising her role as Sabrina Spellman anytime in the near future. Yet, somehow over the last few days, a post that seems to have originated on a RuPaul’s Drag Race fan page seems to have led fans into thinking that a reboot series was already in the works.

The post featured a seemingly photoshopped graphic of Melissa Joan Hart wearing a crimson red dress and waving some magical sparkles through the air. The photo featured the ABC logo and featured the tagline, ‘Like Mother, Like Daughter,” insinuating that the supposed series would be a continuation rather than a reboot. Excited fans left thousands of comments on the post in the span of less than a day.

So, Will There Be a Reboot of Sabrina?

The short answer is, not right now. Unfortunately, the post was a complete hoax. A fan with an active imagination likely created the graphic and shared it on social media, where it spread like wild fire. The image is clearly not even Melissa’s body and no actual information could be found anywhere on the web to corroborate it. 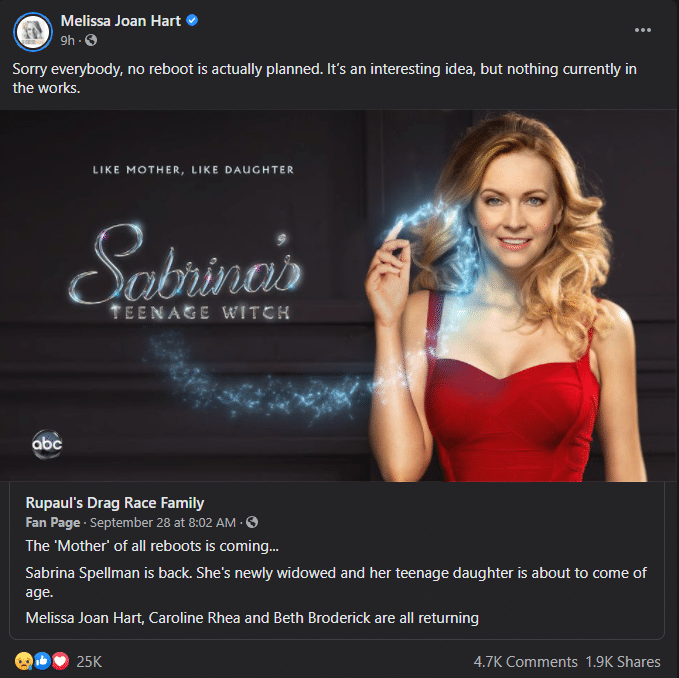 In order to help clear up the confusion, Melissa took to her official Facebook fan page today to let everyone down gently. “Sorry everybody,” She wrote, resharing the faux show graphic, “no reboot is actually planned. It’s an interesting idea, but nothing currently in the works.”

While we would all love to see Melissa and the cast come back for a new chapter, it’s just not happening right now. The actress, however, hasn’t said she is against a reboot if one were to come along. Maybe, if all of our inner children keep our fingers crossed, our favorite magical series will grace the screen again one day in the future.

Stay tuned to TV Shows Ace for the latest on all your favorite shows and industry news!