Kim Kardashian claims she has experienced a most frightening incident in her $60 million mansion. The experience has left her traumatized; the reality star claims she would be ‘moving’ out of her Hidden Hills, California home. The 40-year-old KUWTK’s star took to Instagram on Sunday night to share her terrifying experience with fans.

Kardashian claims she has found something so horrific inside her home that she feels as if she may be unable to stay. However, Kim, who owns numerous homes across the globe, certainly won’t have any issues finding a place to go should she decide to make a move.  So what could the reality star have discovered to leave her feeling this way? Well, according to Kim she has an intruder. A big, hairy eight-legged intruder.

Kim describes the massive spider as one of the things in life that Kardashian is actually terrified of.  The mother of four filmed the giant spider on her wall as she told her social media followers, “I’m moving!”

KUWTK fans will remember Kim has revealed her fear of spiders before during the family reality series. During one episode, Kardashian’s daughter North West asks her mom for a pet spider.

According to The Sun, Kim tells her young daughter it would ‘never happen.’

“I have a pretty awful relationship with spiders,” she told the camera during a confessional.

“I absolutely hate them.”

“That is absolutely never gonna happen,” she told fans.

“Like, never ever ever, as long as she’s living under my roof, never going to happen.” 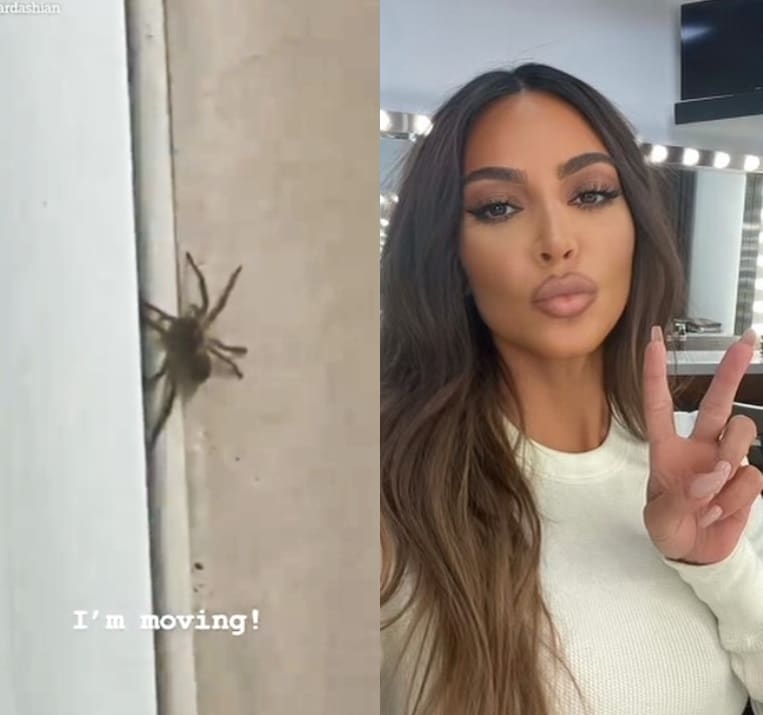 Oddly enough, despite Kim Kardashian’s fear of spiders, Kardashian decorated her home covering it in giant spiders and webs throughout the estate last Halloween. Kim claimed that due to COVID, things were not very festive, and she wanted to make the holiday memorable for her children.

Now we highly doubt that Kim will really move from her family home due to one tiny little spider visiting. But, some celebrities have done crazier things. The mansion in question belonged to Kim and Kanye West during their marriage. However, since their split, Kim Kardashian decided to remain living at the property with her four children, North, Saint, Chicago, and Psalm.

Kim and her oldest daughter North West recently made news headlines after North burst in on her mother while filming an Instagram story. North called Kim out, telling her she always uses a ‘fake voice’ when she films.

After several minutes of arguing the point, Kim finally turns to her niece Penelope Disick asking her if she believes she uses a different voice when she films.

Hoping that Penelope would take her aunt’s side, Penelope bluntly answers Kim Kardashian’s question with a simple “YES.” Kim finally gives up her argument when dissed by her sister Kourtney’s daughter. Instead, North West winds up teasing her mother by mocking her in a high squealing voice. Kids will be kids when it comes to teasing and mocking their family members. After all, North West has learned from the best. All of the Kardashian women are notorious for mocking their momager, Kris Jenner.