Former Real Housewives of Orange County star Braunwyn Windham-Burke is announcing that she plans on relocating to New York City. The reality star spoke with E! News on Thursday, revealing her big plans. During the Bulgari B.Zero1 NYFW Party, Burke explains her reasoning for deciding to leave California.

“For me, it’s becoming a New Yorker,” Braunwyn claims. “I’m not just here for the week, I’m making a move. I’m going to be doing a dual situation.”

Since Braunwyn Windham-Burke’s departure from the Bravo hit reality series, The Real Housewives of Orange County, she claims she has spent most of her time avoiding the spotlight. She also reveals she has moved past her divorce with a new relationship. Burke states that after spending time in Hawaii, she has found some clarity. She admits one of the reasons she is so keen on moving to New York is the fantastic opportunities that have come to fruition for her recently. That and the fact that she feels it is now the right time in her life to make a move.

Braunwyn, also shares that she and her best friend Amy Schechter have been spending the week looking for an apartment for her. She also claims that she and California girlfriend Fernanda Rocha, though still together, are doing their own thing for the time being. “She’s been in California, I’ve been in Hawaii. I think we’ll always be friends but, geographically it’s been a little hard to spend time together.” 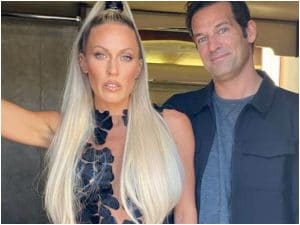 When asked how her husband Sean Burke feels about her move, Braunwyn Winham-Burke states he fully supports her decision. “He thinks it’s a good choice. He knows this has always been a dream of mine. Sean sees some of the things that are happening. He’s like, ‘I support you. The kids are going to be OK.’ And I’ll fly back and forth.”

As far as how she feels about being fired from Bravo’s RHOC? Burke claims she feels betrayed somewhat. She reveals at first it was disappointing to hear Bravo’s decision. Braunwyn said she has come so far, but she reveals that nobody “took the time” to reach out to her regarding her progress.

As previously reported by TV Show Ace, Dodd feels Braunwyn Windham-Burke is to blame for her being fired and has publicly shared those feelings via social media. ‘It is what it is’ claims Burke.

“I was really looking forward to showing the other side of my journey into sobriety. You know, the light at the end of the tunnel.”

The Season 16 of RHOC’s Bravo premiere date is TBD at this time.