Reality star Todd Chrisley acknowledges that he and his family live on a mountain of rumors — but, he doesn’t give a f*ck. In fact, it was just a few days ago that the reality TV father made his thoughts on rumors swirling about his family crystal clear. Turns out, he really could care less about them. What exactly did Todd Chrisley have to say about rumors, gossip, and fan theories? Keep reading and we’ll get you caught up.

It was just two days ago that Todd Chrisley took to Instagram to talk rumors. He noted that he couldn’t be bothered to take the time to “clean up” rumors about himself. In fact, he didn’t give a f*ck what rumors about him had to say. He concluded his message by noting anyone who heard rumors about him could just “go hear them again.”

Savannah, Chase, and Kyle’s wife Ashleigh applauded Todd’s sassy Instagram post. They were here for the fire in his belly. Ashleigh has actually posted similar memes about rumors on her Instagram Stories a few times. Savannah, however, is known to clap pack at trolls when they appear on her Instagram profile.

Now, is it true that he doesn’t care about rumors and gossip?

The sassy and fire in the Instagram post regarding rumors was real. Fans agreed in the comments it definitely felt like something Todd would fire off at trolls. That being said, some fans are a little skeptical regarding whether Todd is actually unphased by rumors and gossip. In fact, the reality TV father contradicted this a few weeks ago when he hopped on his podcast to defend his son Kyle against rumors spread by Katie Joy of Without A Crystal Ball. 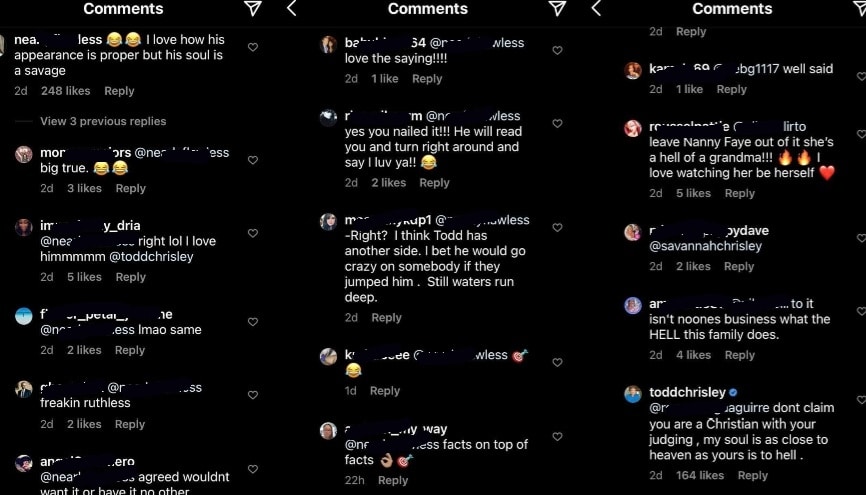 Todd Chrisley explained during a podcast he was speaking out because Kyle was not the only one involved in reporting him and his wife Julie to the IRS. More importantly, Todd explains that Kyle owned up to the part he played and apologized to his father. Kyle is still his son and all his forgiven.

Todd Chrisley has also made it known that Lindsie Chrisley is also still his child. While Lindsie has made it clear they will never reconcile. Todd wanted the world to know the door was always ope

Now, this isn’t a complete contradiction as this rumor and gossip floating around tabloids was related to Todd’s children. So, it is possible he only doesn’t care about rumors regarding him.

Are you surprised Todd Chrisley has no interest in addressing rumors? Share your thoughts with us in the comments. And, keep coming back for the latest on the reality TV family.