Gwendlyn Brown of Sister Wives took to Instagram yesterday to share a photo of a bloody wound, and her rumored girlfriend offered to help lick it clean.

The photo featured Gwendlyn Brown with a smile on her face as she held her phone up and snapped a photo of her injury. The photo featured the TLC personality with one knee planted on the floor and other opposite foot flat on the ground. This allowed her to point her injured knee toward the mirror to snap a photo. Her concerned dog was standing next to her. The dog looked genuinely concerned about the wound.

The wound looked to be at least the size of a quarter. It also looked as though Gwendlyn Brown had yet to clean up the injury. Blood could be seen rolling down her leg all the way to the top of her shoes.

Gwendlyn Brown explained in her caption that a skateboarder crashed into her while she was heading to her next class.

The bloody gash on her leg wasn’t the only thing about this post that caught Sister Wives fans’ attention though. Turns out, the comments of the photo were pretty popping. Gwendlyn’s rumored girlfriend, Angela Chappell, left a comment that has been liked half a dozen times. A comment that is pretty hard to ignore.

Gwendlyn Brown’s rumored girlfriend offers to lick up the wound

Her rumored girlfriend, Angela Chappell, commented on the post offering to “lick it up.” The comment was liked half a dozen times. Gwendlyn pinned the comment to the top of her comment section. And, she tagged Angela before telling her followers to “look at this freak.” Her rumored girlfriend fired back asking why she called her a freak. 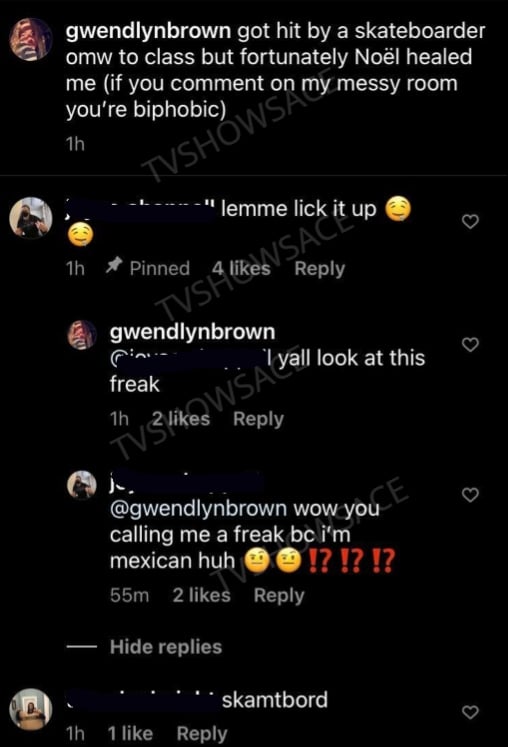 One of the TLC star’s other followers chimed into the comment noting that dog saliva does have natural healing powers. The individual proceeded to encourage Gwen to let her dog lick up the wound, not her girlfriend.

As we previously reported, her rumored girlfriend posted a photo of herself hanging out with Gwen in person not too long ago. Her caption suggested she didn’t love the Sister Wives star in a romantic way. But, the reactions in the comments revealed no one believed that to be true.

What do you think about her rumored girlfriend wanting to lick up her bloody wound? Share your thoughts in the comments. And, keep coming back for the latest on the TLC personality.