Young and The Restless star Eric Braeden’s most recent tweet has his fans in an uproar. The veteran daytime Emmy award-winning actor certainly has his base in a tizzy after he teased about his future. The Victor Newman portrayer definitely has a sense of humor. However, YR fans let him know how they really feel about him and how long they want him around on this CBS soap.

Young and The Restless actor Eric Braeden nearly gave his fans heart attack in the early morning hours today. He tweeted a video of an older man attempting to get in a sports car. Of course, a man of his age won’t easily slide in and out of the small car as easily as a man considerably younger. Eric captioned his tweet with, “That’s why I’m not considering retirement!”.

Young and The Restless cast members and fans alike chimed in to sing Braeden’s praises. Greg Rikaart (Kevin Fisher) certainly found the humor in the post and commented, ” I’m certain that’s how I’d exit a Ferrari”.While some fans were saddened by Braeden’s even hinting of retiring. Certainly, dropping the “R” word tweaked YR fans’ curiosity. Hopefully, there’s no grain of truth or veiled message to decipher by Eric’s use of the word retirement.

Fan’s comments were pouring in like this one saying: “Thank God! Victor’s not ever leaving!!!! with five hearts 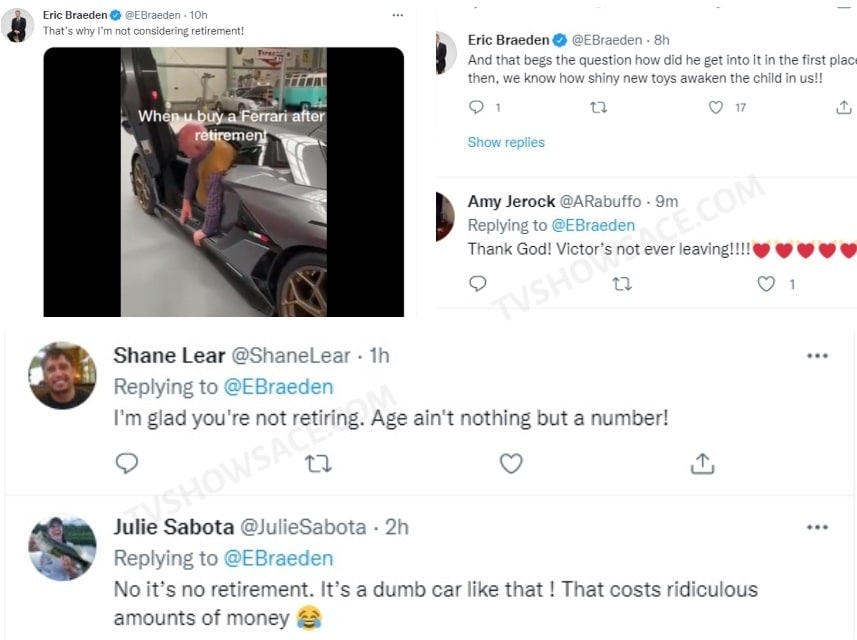 Young and The Restless would not be the same without Victor Newman, the long-time soap veteran is an icon for his portrayal. No other actor would ever be able to step into his very big shoes. As of now, Eric Braeden has no plans to retire and leave his fictional home of Genoa City.

That’s great news since many YR fans were blindsided this morning, and now they are relieved to know Victor Newman is here to stay.

Watch Young and The Restless weekdays on CBS.

Make sure to check Tv Shows Ace often for all the latest Young and The Restless news and spoilers.