Now that Kylie Jenner’s second pregnancy news is officially out, fans are hungry for all the details about the blessed event. Considering that Kylie is very active on Instagram, we assume that she is not very far along per her recent photos. However, Life &Style reports that they have inside information on the pregnancy details.

L&S’s report reveals that the KarJenner informant reveals that Kylie is just passing the three-month mark. Which makes sense considering most expectant mothers tend to wait until then to start sharing the pregnancy news. What this means is Kylie Jenner and Travis Scott’s second baby could be due sometime in February. If so then, soon-to-be big sister Stormi and the new baby will get to share a birthday month.

At this time, there is no information about the baby’s gender. Fans will be paying close attention to Kylie’s Instagram shares, looking for hints and clues along the way.

Travis and Kylie’s relationship status, well, is not officially known. However, last month, it was revealed that they were giving the relationship another shot. The pair have remained very close friends and co-parents since they split in 2019. With another baby on the way, who knows wedding bells could be next for them. 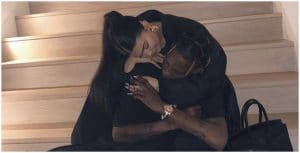 KUWTK fans are also still wondering if another baby announcement may soon erupt. The last Time Kylie Jenner was pregnant, she kept a well-guarded secret for several months. But, it also just happened that sister Khloe Kardashian was also expecting.

Is Kylie Jenner The Only KarJenner Pregnant?

For several weeks now, Kardashian and Jenner pregnancy rumors have been brewing. However, many fans still believe there is a chance that Kourtney Kardashian could also be pregnant with Travis Barker’s baby. Kourtney has been teasing her followers quite a bit. She claims to have late-night cravings and shares Instagram photos of deliveries from Buy Buy Baby, tagging them as special deliveries.

Kourt is living her best life and enjoying her newfound love with Travis Barker. Those close to Kourtney claim that they are expecting engagement news from the couple very soon, revealing all signs are pointing in that direction. 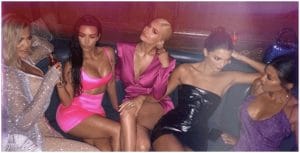 2022, just maybe a full year for the Kardashian/Jenner clan, with new babies and weddings at every turn. Love is in the air at every turn, not only for Kourtney but also for Kylie and Travis Scott and Kendall and Devon Booker. It looks as if momager Kris Jenner is going to have even more on her plate than she first believed. Now KarJenner fans are wondering, with KUWTK ending its run on E! if we will continue to get to look into their lives when they begin their new Hulu reality series.

Not many details have been revealed yet about the Kardashian’s Hulu series. All that we know at this point is that Kim Kardashian claims the family will be back soon, and Scott Disick will be with them!

Congratulations to Kylie Jenner and Travis Scott on the couple’s baby news!