Farrah Abraham never learns from her past mistakes. Fans are currently dragging the former Teen Mom OG star after sharing a photo of her daughter Sophia’s homeschool locker.

According to The Sun, fans are showing irritation with Farrah for spoiling her 12-year-old daughter Sophia Abraham with materialistic things.  In Farrah’s latest TikTok video, she gives her followers a tour of Sophia’s homeschool locker. Unfortunately, the locker is completely lacking school books.

Sophia Abraham Learns What Is Important From Mom Farrah Abraham 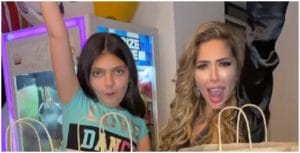 The middle school student is happily decorating her locker in preparation for the upcoming school year. Fans reveal their distaste as all of the important Abraham items is adding to the locker.  Of course, what homeschool locker would be complete without a large grooming mirror, flashing lights, stickers galore, and most importantly, a stack of cash?

The shelves of Sophia’s locker are also full of Farrah’s daughter’s favorite belongings including, expensive perfume, purse, headphones, and top-line sneakers. During the clip, Farrah is also stepping in to close the locker doors, revealing a sign that reads “Made it to middle school.” Per the usual, plenty of comments began pouring, revealing how disgusting most believe Farrah’s parenting is. 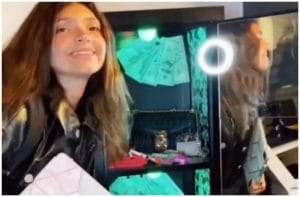 One person wrote: “So freaking materialistic is sickening. And passing that down to your crotch goblin. She has no chance in this world.”

Another added: “Must be nice to be spoiled.” Finally, a third chimed in: “I bet she’s the snootiest little girl.” 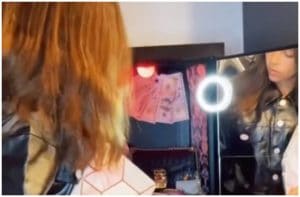 Farrah Abraham knows what her social media follower’s reactions will be. She is growing accustomed to the criticism she receives when it comes to her parenting skills. Fans feel that Farrah is not doing Sophia any favors in the way she is choosing to raise the young girl. Recently, fans were calling Farrah out after Sophia revealed that she was skipping summer camp with kids her age to hang with her mom on a yacht.

Farrah is often under scrutiny for treating Sophia as a friend instead of a daughter. However, it is a rare occasion that the tween is spending time with friends her age.

Sophia defends her mother’s actions on TikTok by telling the camera: “I got a bed, I got a roof, and I’m fine.” Farrah adds to the sarcasm chiming in, saying: “Oh my god, I got a bed and a roof. I’m fine, and I eat, and I sleep. I have good mental health. I’m like overall an amazing person.”

Fans who have been following Farrah Abraham and her daughter through the years believe that Sophia is heading for disaster sooner than later. They claim that Farrah Abraham is spoiling Sophia instead of teaching her essential values. As Sophia hits her teen years, many believe that she will continue to mimick her mother’s controversial footsteps.