Unfortunately for Farrah’s mom, Debra, the reviews are pretty bad. Abraham’s followers are crucifying the 63-year-old grandmother. Danielsen’s film will hit theaters in October. However, the sneak peeks and early reviews are less than favorable according to The Sun.

Debra appears in a promo image on Instagram and wearing a medical lab coat and sporting glasses. The caption of the photo stated, “With an all-star cast including like Meleeka Clary, Debra Danielsen, Randy Bruce, and many more.” 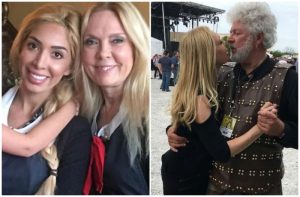 It did not take long before Deb’s movie promo began making the rounds across Teen Mom fan pages. One fan shares the photo and writes, “Anyone gonna go and see #DebzOG new movie?”

“Oh Lord. The delusion runs deep within this family. Who in their right mind would put her in a movie,” asks one commenter.

“‘All-Star Cast’ is a bit of a stretch, don’t you think?” a third added. “Mighty generous with the word ‘actor,'” claims another.

Teen Mom OG fans remember that Farrah Abraham and Debra Danielsen’s relationship is less than perfect. Over the years, fans have been witness to a multitude of Debra’s career endeavors.

Farrah Abraham and Mom Deb, Two Peas In A Pod

Deb’s career choices include singing, rapping, and sharing numerous YouTube videos, including a singing workout video. Abraham’s mother is also a published author, penning,  Vapor: A True Story of How I Fell Victim to Catfishing.

Danielsen’s career choices over the years have often found followers questioning her mental health. Likewise, Farrah Abraham also often finds herself on the chopping block for her life choices.

Those most often have to do with her questionable parenting skills regarding Farrah’s 12-year-old daughter Sophia Abraham. Also, over the years, Farrah’s controversial choices when it comes to raising Sophia.

Most recently, fans are calling Farrah out for allowing Sophia to skip summer camp to spend time aboard a yacht with her and several men. Also, Abraham’s recent left fans disgusted with the memoir Dream Twenties after the reality/adult entertainer uses the book to blame her mother for all the bad things in her life.

“Someone give this crazy family reality series, how entertaining would this bunch be,” states one commenter.

“This entire family needs to seek therapy, and go away,” states another.

It doesn’t appear as if Farrah Abraham or her mother Debra Danielsen will be winning any popularity awards anytime soon.

Audrey Roloff Called Out For Plagiarism: What Did She Steal?
Kim Kardashian Has Fears About Wetting Herself?
Savannah Guthrie Supports Al Roker Amid Health Struggles
Will Johnny DePhillipo Return to ‘Bachelor In Paradise’ Next Year?
‘Today:’ Missing Al Roker Has His Own Thanksgiving Day Parade